Hello, my name is Tim Blasius and I am a physics graduate student at Caltech.  I recently appeared in a comedy bit on the TV show Conan, where I corrected Conan O’Brien’s physics.  I have been asked to share a few words describing this experience.

As with any story involving unbridled success, it begins as a tale of unnoticed, under-appreciated  and nearly unending hard work – I usually watch the show Conan during dinner with my fiancé.  Accordingly, I have seen many segments called “fan corrections” where Conan viewers submit YouTube videos explaining mistakes that they believe Conan has made on the show.  Some are nerdy and funny like the one where viewers pointed out that Conan used a red-tailed hawk call instead of a bald eagle call.  I was like a crocodile lurking in the water waiting for Conan to make a mistake in my expertise.  Then, like a woefully ignorant antelope sipping from the river Nile, Conan made a physics mistake when mocking Felix Baumgartner’s free fall, and I, being the bloodthirsty physics predator that I am, snapped the jaws of immutable truth around his naïve self.

Conan claimed to have dropped an assistant 4 inches in 6 thousandths of a second.  These numbers immediately struck me as suspect.  Being the jedi physics master that I am, I quickly set myself upon this problem – I got out a piece of paper and worked out distance traveled given a constant acceleration,

.  Then I solved for time and went to Google calculator and typed the numeric values using my memorized value for

.  The now famous answer, is that the free fall must have taken an amount of time 24 times longer than Conan had dictated.  I had indeed won the day.

Later, while in my office at Caltech I began filming my response to Conan.  Foreseeing that my physics proof would be iron-clad, I purposefully gave him some fodder with which to make fun of me.  One of my office mates has an unusual and frankly unsettling obsession with basset hounds – he owns and proudly displays multiple basset hound calendars.  I put one of these behind me for the video and Conan happily took the bait.  I also put a picture of one of our groups “zipper” optical cavities behind me, but seeing as Conan could not comprehend what that was, he did not make any jokes about that.  My unedited video can be found here.  Conan’s edit can be found here and here:

As this video has spread around my family, friends, and campus, many have asked what my life has been like after the airing of this Conan video.  Well, fame is a powerful and corrupting force, but luckily I have not let it go to my head.  I received my star on the Hollywood walk of fame last Wednesday, and I have coordinated a team of professionals to make sure there is a single fresh red rose laying atop my star 24 hours a day.  They also make sure that no one steps on the star; however, fair young women are allowed to gently weep nearby.  In other words, not much has changed.

I hope to see you around campus (no eye contact of course), 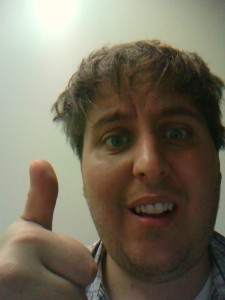 7 thoughts on “The TV Frontier”