You might think the title is a little exaggerated, but if there’s one thing I’ve learned from Theoretical Physicists so far, it’s to be bold with my conjectures about reality.

Welcome to the second installment of our series of animations about Quantum Information! After an auspicious start describing doing the impossible, this week we take a step back to talk in general terms about what makes the Quantum World different and how these differences can be used to build Quantum Computers.

In this video, I interviewed John Preskill and Spiros Michalakis. John is the co-Director of the Institute for Quantum Information and Matter. He’s known for many things, including making (and winning) bets with Stephen Hawking. Spiros hails from Greece, and probably never thought he’d see himself drawn in a Faustian devil outfit in the name of science (although, he’s so motivated about outreach, he’d probably do it). 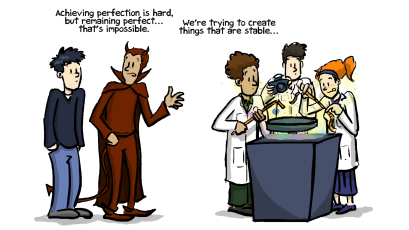 In preparation to make this video, I thought I’d do what any serious writer would do to exhaustively research a complex topic like this: read the Wikipedia page and call it a day. But then, while visiting the local library with my son, I stumbled upon a small section of books about Quantum Physics aimed at a general audience.

I thought, “Great! I’ll read these books and learn that way!” When I opened the books, though, they were mostly all text. I’m not against text, but when you’re a busy* cartoonist on a deadline trying to learn one of the most complex topics humans have ever devised, a few figures would help. On the other hand, fewer graphics mean more job security for busy cartoonists, so I can’t really complain. (*=Not really).

In particular, I started to read “The Quantum Story: A History in 40 Moments” by Jim Baggott. First, telling a story in 40 moments sounds a lot like telling a story with comics, and second, I thought it would be great to learn about these concepts from the point of view of how they came up with them. So, I eagerly opened the book and here is what it says in the Preface:

“Niels Bohr claimed that anybody who is not shocked by the theory has not understood it… Richard Feynman went further: he claimed that nobody understands it.”

One page in, and it’s already telling me to give up.

It’s a fascinating read, I highly recommend the book. Baggott makes the claim that,

“The reality of Scientific Endeavor is profoundly messy, often illogical, deeply emotional, and driven by the individual personalities involved as they sleepwalk their way to a temporary scientific truth.”

I’m glad this history was recorded. I hope in a way that these videos help record a quantum of the developing story, as we humans try to create pockets of quantum weirdness that can scale up. As John says in the video, it is very exciting.

Now, if you’ll excuse me, I need to sleepwalk back to bed.

Watch the second installment of this series:

Jorge Cham is the creator of Piled Higher and Deeper (www.phdcomics.com).

Produced in Partnership with the Institute for Quantum Information and Matter (http://iqim.caltech.edu) at Caltech with funding provided by the National Science Foundation.