Justin Dressel’s office could understudy for the archetype of a physicist’s office. A long, rectangular table resembles a lab bench. Atop the table perches a tesla coil. A larger tesla coil perches on Justin’s desk. Rubik’s cubes and other puzzles surround a computer and papers. In front of the desk hangs a whiteboard. 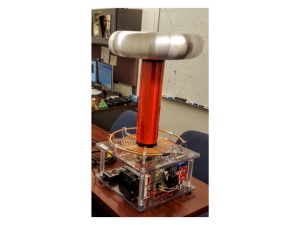 A tesla coil of Justin Dressel’s

denote the probability that any given physicist keeps a tesla coil in his or her office.

ranges between zero and one. Quasiprobabilities can dip below zero. They can assume nonreal values, dependent on the imaginary number

We can infer the tesla-coil probability by observing many physicists’ offices:

We can infer quasiprobabilities from weak measurements, Justin explained. You can measure the number of tesla coils in an office by shining light on the office, correlating the light’s state with the tesla-coil number, and capturing the light on photographic paper. The correlation needn’t affect the tesla coils. Observing a quantum state changes the state, by the Uncertainty Principle heralded by Heisenberg.

We could observe a quantum system weakly. We’d correlate our measurement device (the analogue of light) with the quantum state (the analogue of the tesla-coil number) unreliably. Imagining shining a dull light on an office for a brief duration. Shadows would obscure our photo. We’d have trouble inferring the number of tesla coils. But the dull, brief light burst would affect the office less than a strong, long burst would.

Justin explained how to infer a quasiprobability from weak measurements. He’d explained on account of an action that others might regard as weak: I’d asked for help. 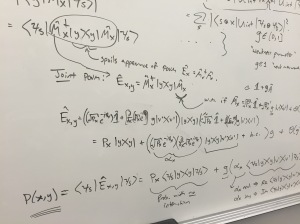 Chaos had seized my attention a few weeks earlier. Chaos is a branch of math and physics that involves phenomena we can’t predict, like weather. I had forayed into quantum chaos for reasons I’ll explain in later posts. I was studying a function

that can flag chaos in cold atoms, black holes, and superconductors.

I’d derived a theorem about

. The theorem involved a UFO of a mathematical object: a probability amplitude that resembled a probability but could assume nonreal values. I presented the theorem to my research group, which was kind enough to provide feedback.

“Is this amplitude physical?” John Preskill asked. “Can you measure it?”

“I don’t know,” I admitted. “I can tell a story about what it signifies.”

“If you could measure it,” he said, “I might be more excited.”

Some scientists extend this principle into a ban on assistance. Some students avoid asking questions for fear of revealing that they don’t understand. Some boast about passing exams and finishing homework without the need to attend office hours. I call their attitude “scientific machismo.”

I’ve all but lived in office hours. I’ve interrupted lectures with questions every few minutes. I didn’t know if I could measure that probability amplitude. But I knew three people who might know. Twenty-five minutes after I emailed them, Justin replied: “The short answer is yes!”

I visited Justin the following week, at Chapman University’s Institute for Quantum Studies. I sat at his bench-like table, eyeing the nearest tesla coil, as he explained. Justin had recognized my probability amplitude from studies of the Kirkwood-Dirac quasiprobability. Experimentalists infer the Kirkwood-Dirac quasiprobability from weak measurements. We could borrow these experimentalists’ techniques, Justin showed, to measure my probability amplitude.

The borrowing grew into a measurement protocol. The theorem grew into a paper. I plunged into quasiprobabilities and weak measurements, following Justin’s advice. John grew more excited.

The meek might inherit the Earth. But the weak shall measure the quasiprobability.

With gratitude to Justin for sharing his expertise and time; and to Justin, Matt Leifer, and Chapman University’s Institute for Quantum Studies for their hospitality.

Chapman’s community was gracious enough to tolerate a seminar from me about thermal states of quantum systems. You can watch the seminar here.

3Debate has raged about whether quasiprobabilities govern classical phenomena.

4I should be able also to recite the solutions from memory.

18 thoughts on “The weak shall inherit the quasiprobability.”