Call me morbid, but, the moment I arrived at Yale, I couldn’t wait to visit the graveyard.

I visited campus last February, to present the Yale Quantum Institute (YQI) Colloquium. The YQI occupies a building whose stone exterior honors Yale’s Gothic architecture and whose sleekness defies it. The YQI has theory and experiments, seminars and colloquia, error-correcting codes and small-scale quantum computers, mugs and laptop bumper stickers. Those assets would have drawn me like honey. But my host, Steve Girvin, piled molasses, fudge, and cookie dough on top: “you should definitely reserve some time to go visit Josiah Willard Gibbs, Jr., Lars Onsager, and John Kirkwood in the Grove Street Cemetery.” 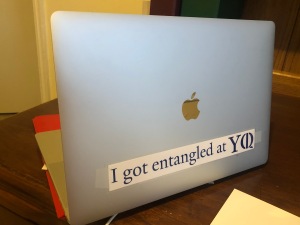 Gibbs, Onsager, and Kirkwood pioneered statistical mechanics. Statistical mechanics is the physics of many-particle systems, energy, efficiency, and entropy, a measure of order. Statistical mechanics helps us understand why time flows in only one direction. As a colleague reminded me at a conference about entropy, “You are young. But you will grow old and die.” That conference featured a field trip to a cemetery at the University of Cambridge. My next entropy-centric conference took place next to a cemetery in Banff, Canada. A quantum-thermodynamics conference included a tour of an Oxford graveyard.1 (That conference reincarnated in Santa Barbara last June, but I found no cemeteries nearby. No wonder I haven’t blogged about it.) Why shouldn’t a quantum-thermodynamics colloquium lead to the Grove Street Cemetery?

Home of the Yale Quantum Institute

The Grove Street Cemetery lies a few blocks from the YQI. I walked from the latter to the former on a morning whose sunshine spoke more of springtime than of February. At one entrance stood a gatehouse that looked older than many of the cemetery’s residents.

“Can you tell me where to find Josiah Willard Gibbs?” I asked the gatekeepers. They handed me a map, traced routes on it, and dispatched me from their lodge. Snow had fallen the previous evening but was losing its battle against the sunshine. I sloshed to a pathway labeled “Locust,” waded along Locust until passing Myrtle, and splashed back and forth until a name caught my eye: “Gibbs.”

One entrance of the Grove Street Cemetery

bath through the box’s walls. After exchanging heat for a long time, the gas reaches thermal equilibrium: Large-scale properties, such as the gas’s energy, quit changing much. Imagine measuring the gas’s energy. What probability does the measurement have of outputting

? The Gibbs distribution provides the answer,

denotes Boltzmann’s constant, a fundamental constant of nature. The

denotes a partition function, which ensures that the probabilities sum to one.

Gibbs lent his name to more than probabilities. A function of probabilities, the Gibbs entropy, prefigured information theory. Entropy features in the Gibbs free energy, which dictates how much work certain thermodynamic systems can perform. A thermodynamic system has many properties, such as temperature and pressure. How many can you control? The answer follows from the Gibbs-Duheim relation. You’ll be able to follow the Gibbs walk, a Yale alumnus tells me, once construction on Yale’s physical-sciences complex ends.

Back I sloshed along Locust Lane. Turning left onto Myrtle, then right onto Cedar, led to a tree that sheltered two tombstones. They looked like buddies about to throw their arms around each other and smile for a photo. The lefthand tombstone reported four degrees, eight service positions, and three scientific honors of John Gamble Kirkwood. The righthand tombstone belonged to Lars Onsager:

Onsager extended thermodynamics beyond equilibrium. Imagine gently poking one property of a thermodynamic system. For example, recall the gas in a box. Imagine connecting one end of the box to a temperature-

bath and the other end to a bath at a slightly higher temperature,

. You’ll have poked the system’s temperature out of equilibrium. Heat will flow from the hotter bath to the colder bath. Particles carry the heat, energy of motion. Suppose that the particles have electric charges. An electric current will flow because of the temperature difference. Similarly, heat can flow because of an electric potential difference, or a pressure difference, and so on. You can cause a thermodynamic system’s elbow to itch, Onsager showed, by tickling the system’s ankle.

The Grove Street Cemetery opened my morning with a whiff of rosemary. The evening closed with a shot of adrenaline. I met with four undergrad women who were taking Steve Girvin’s course, an advanced introduction to physics. I should have left the conversation bled of energy: Since visiting the cemetery, I’d held six discussions with nine people. But energy can flow backward. The students asked how I’d come to postdoc at Harvard; I asked what they might major in. They described the research they hoped to explore; I explained how I’d constructed my research program. They asked if I’d had to work as hard as they to understand physics; I confessed that I might have had to work harder.

I left the YQI content, that night. Such a future deserves its past; and such a past, its future.

With thanks to Steve Girvin, Florian Carle, and the Yale Quantum Institute for their hospitality.

1Thermodynamics is a physical theory that emerges from statistical mechanics.