I have been teaching Chemistry, Physics and Earth Science for twenty five years now, the last fourteen at Duarte High School. I have always emphasized laboratories, focusing on the scientific process and have a philosophy of imparting translatable skills along the way. This summer I had the honor of being selected to join the IQIM Summer Research Institute and as part of that program I worked with Rana Adikhari’s research group, seeking to reduce sources of noise (enhance signal quality) for the Laser Interferometer Gravitational Wave Observatory (LIGO) project. Why? To better detect signals which indicate warps in spacetime!

I love being outdoors, even when I commute to Caltech.

As a high school science teacher, when covering the historical development of the current model of the atom, I emphasize several recurring themes:

What is LIGO?
LIGO is an NSF funded project led by groups at Caltech and MIT whose purpose is to measure ripples in spacetime caused by gravitational waves. A gravitational wave can be detected by measuring changes in length along perpendicular arms of a 4 km long L-shaped apparatus. In Advanced LIGO, the next generation detector scheduled to start operation in 2015, a 500 kilowatt laser beam (the equivalent power of 100 million laser pointers!) will shoot down both perpendicular arms simultaneously coming from a single source known as the beam splitter. Mirrors on the far end and proximal ends serve to let the light bounce back and forth resonantly, amplifying the signal to detectable levels. When the signals from both arms are locked, there is complete destructive interference so that when the two beams arrive at the photo diode detector no signal is detected. Since the speed of light, c, is a constant regardless of reference frame, as a gravitational wave passes, the lengths of the perpendicular X and Y arms change by different amounts, as predicted by the theory of general relativity, and the arriving wavefronts no longer cancel out completely. Thus a signal has arrived, indicating a warp in space time.

The length of the arm does not change by much at all. Now we come to the difficult part; knowing the distance between the two mirrors. As the gravitational wave passes, the length of the 4 km arm changes by as little as

. For a little perspective, that amounts to about

the width of a nucleus of an atom. All kinds of controls have to be employed in order to prevent mirror sway, (seismic isolators being the main one). Mirrors can also change shape when the laser beam hits them and warms them up. Conversely, more powerful lasers provide greater signal strength. Systems have been devised to heat up the mirrors in such a way as to cancel out any shape changes due to heating by the laser. In order to reduce noise, mirror surfaces have to be ground and polished with a tolerance of no greater than 1 angstrom

, the size of a single Hydrogen atom! Light needs to reflect back uniformly with an absolute minimum of scattering so as to prevent any stray radiation from getting into the vacuum chamber

– pretty much empty space, as 1 Torr corresponds to about 1/1000 atmospheric pressures. Minimizing noise also means the internal structure of the mirror needs to be as close to perfect as current technology allows. And that is where the light scattering experiment I have had the privilege of working on with Dr. Jan Harms comes into focus. (pun intended)

The Experiment: Comparing Light Scatter from a Plane Mirror
On the day of my arrival, my Physics knowledge was quickly put to the test. Little did I know that scientific process skills were to be used every day for the duration of the experiment. Jan wanted to replace the battery of the laser with a plug-in DC source. He showed me a calculation where he could plug in the source voltage and obtain the voltage drop at each resistor:

.
Once the source of power was constant and not diminishing, as in the case of a battery, we set about eliminating the next possible variable: focus. We could not find a diverging lens of correct focal length inside the LIGO workshop; both lenses on hand had focal lengths that were too long. So the optics equation was employed:

. Next came the problem of removing stray radiation (might give false results!) Damps were deployed, (shown below) wherever reflected light interfered with the experiment. 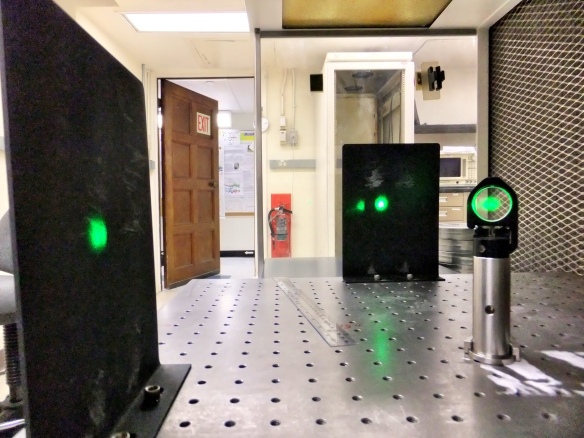 Reducing interference from stray radiation (light) is important for precision measurements. The black metallic walls are inserted at positions where the beam is reflected, thus shielding the lens from unwanted light that travels along the path of the beam.

Irises were arranged in line with the laser beam to assure identical size and placement of beam on mirror for all three colors; red (633nm), green (532nm), and purple (405 nm) A trial run was almost ready. An electronic CCD camera connected to the computer was then hooked up and attached to a 40 cm long rotating aluminum arm and a lens was placed in front of the camera at the correct distance, (thank you optics equation). A plane mirror was placed from our best guesstimate at the center of rotation.

Trial photographs at increasing angles (towards normal) showed images of point defects migrating from right to left across the screen. This led me to conclude that the mirror was between the axis of rotation and the camera. With repeated testing, we finally got the mirror surface at exactly the axis of rotation, (migration of image stopped). Once again we removed another unwanted variable. All the while, over the course of the improvisations, Dr. Harms was sharing his thoughts and intentions, communicating his progress, or lack thereof, on the lab’s online log-book for all concerned parties. Aha! Another important part of the scientific method, communication!

On the subject of communication, I remember one day being invited to join Jan and Prof. Adhikari, for lunch.  Dr. Adhikari had a few questions and suggestions for Jan that they discussed over food.  I realized then that universities such as Caltech are hotbeds of innovation because people with very specialized knowledge can have face-to-face discussions! And it seemed to me that this type of interaction is more important for progress than more modern means of communication.

At last, we were ready to take some pictures that would be fit for analysis. The various colors of light would allow us to image the internal structure of the mirrors at different wavelengths. The details of that analysis will have to wait until another post, though. Maybe I can convince Dr. Harms to write about his experience with me this summer!

What’s next?
When I asked Jan how he expected to use the information gleaned from this experiment, he said when the data for the green laser comes in, hopefully something can be learned from a comparison of the purple, green and red wavelengths and perhaps the information may be extrapolated to lead to a greater understanding of the action of infrared light on mirror surfaces. If the analysis finds something compelling, optical manufacturers will get some feedback on how to improve their manufacturing processes and enhance their outcomes. Moreover, high quality images and mirrors are in demand for military imaging, with spillover benefits in quantum cryptography, and quantum imaging.

Teaching science…
When I started this project, I had no idea what to expect. Now, I have a new appreciation for the importance of the roles for math, programming and communication in scientific research and in engineering in general. The importance of computer skills, namely, the MATLAB program was a real eye opener for me.  I also learned that the world-wide-web is accelerating the pace of innovation because of improvements in communication. Moreover, in our weekly meetings with Spiros Michalakis, I learned more about the Khan Academy and the “Flipped Classroom” that it helps facilitate.  At the very least, I plan to include more laboratories where students will be making their own graphs using Excel spreadsheets. But most importantly, I have made many contacts while at Caltech this summer and I look forward to having captivating guest speakers in my classroom this coming year!

Editor’s note: Steve Maloney has been teaching Regular and AP Chemistry and Physics and is the coach of the Solar Boat team at Duarte High School. He has a B.Sc. in Geology from the University of Southern Carolina. Like Mr. Fackrell (“How I learned to stop worrying and love graphene”), and Mrs. Walsh (“Superconductors in the Summer”), he is part of IQIM’s Summer Research Institute, a six-week program designed to expose local physics teachers and high-school students to cutting-edge research taking place at Caltech’s research labs. He worked at the Adhikari Lab and is a member of IQIM’s Curriculum Development team, a group of teachers, students and Caltech postdocs, who are working to bring Quantum Mechanics to High Schools across the state through interactive simulations and hands-on experiments with lasers and polarizers.

5 thoughts on “Much more than Lasers and Mirrors”