What am I referring to with this title? It is similar to the name of this blog–but that’s not where this particular title comes from–although there is a common denominator. Frontiers of Quantum Information Science was the theme for the 31st Jerusalem winter school in theoretical physics, which takes place annually at the Israeli Institute for Advanced Studies located on the Givat Ram campus of the Hebrew University of Jerusalem. The school took place from December 30, 2013 through January 9, 2014, but some of the attendees are still trickling back to their home institutions. The common denominator is that our very own John Preskill was the director of this school; co-directed by Michael Ben-Or and Patrick Hayden. John mentioned during a previous post and reiterated during his opening remarks that this is the first time the IIAS has chosen quantum information to be the topic for its prestigious advanced school–another sign of quantum information’s emergence as an important sub-field of physics. In this blog post, I’m going to do my best to recount these festivities while John protects his home from forest fires, prepares a talk for the Simons Institute’s workshop on Hamiltonian complexity, teaches his quantum information course and celebrates his birthday 60+1.

The school was mainly targeted at physicists, but it was diversely represented. Proof of the value of this diversity came in an interaction between a computer scientist and a physicist, which led to one of the school’s most memorable moments. Both of my most memorable moments started with the talent show (I was surprised that so many talents were on display at a physics conference…) Anyways, towards the end of the show, Mateus Araújo Santos, a PhD student in Vienna, entered the stage and mentioned that he could channel “the ghost of Feynman” to serve as an oracle for NP-complete decision problems. After making this claim, people obviously turned to Scott Aaronson, hoping that he’d be able to break the oracle. However, in order for this to happen, we had to wait until Scott’s third lecture about linear optics and boson sampling the next day. You can watch Scott bombard the oracle with decision problems from 1:00-2:15 during the video from his third lecture. 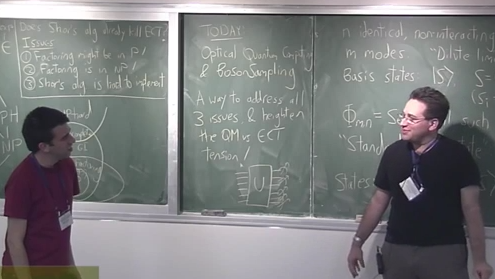 Scott Aaronson grilling the oracle with a string of NP-complete decision problems! From 1:00-2:15 during this video.

The other most memorable moment was when John briefly danced Gangnam style during Soonwon Choi‘s talent show performance. Unfortunately, I thought I had this on video, but the video didn’t record. If anyone has video evidence of this, then please share!

So what topics did the organizers and lecturers deem to be on the frontier? With lots of information lost in the coarse graining procedure, here is my distillation of the major themes: Renato Renner and Michal Horodecki spoke about quantum thermodynamics and quantum foundations. Barbara Terhal and David DiVincenzo spoke about practical issues related to actually building a quantum computer (error correcting codes and superconducting qubits.) Scott Aaronson and Stephen Jordan spoke about issues at the intersection of computer science and quantum information. Frank Verstraete spoke about quantum matter. Ady Stern spoke about topological quantum computation. Finally, Rob Myers and Daniel Harlow spoke about issues at the intersection of high energy theory and quantum information. I found this last theme particularly interesting, because as others have mentioned before, it’s evidence of a relatively new trend (Rob, John.) Below are twitterable descriptions of each of the topics.

Renato Renner: Shannon/Von Neumann entropy isn’t the full story for quantum systems. What are the laws of thermodynamics when you are in the few particle limit? Smooth entropies to the rescue!

Michal Horodecki: what transitions are allowed for a quantum system interacting with an environment? There is a second law of quantum thermodynamics and there is a family of free energies.

Scott Aaronson: explained boson sampling and its ramifications. He and Alex Arkhipov have argued that a rudimentary type of computer, which would involve creating single photons and then sending N of them through beamsplitters and phase shifters, would allow them to compute the permanent of an NxN matrix, which should be incredibly hard classically. In particular, this would cause the polynomial hierarchy to collapse, which would probably overturn the Extended Church-Turing Thesis. In other words, they’ve provided one of the most convincing arguments to date that there are physical processes which a classical computer would not be able to efficiently simulate!

Stephen Jordan: explained how to approximate the Jones polynomial using a quantum computer.

Frank Verstraete: we’ve learned how to efficiently store many quantum states on classical computers (DMRG, MPS, PEPS). This line of thinking has led to many breakthroughs in our understanding of quantum systems and entanglement more broadly: area laws, Lieb-Robinson bounds and entanglement entropy (to name a few.)

Ady Stern: how can you play with quantum Hall systems in order to realize anyons, and then braid them to do topological quantum computation?

Daniel Harlow: set the stage and then introduced the firewall paradox. This was one of the most background intensive sets of lectures, so most of his time was spent framing the paradox, but he eventually touched upon his paper with Patrick Hayden, where they show that it would take a very long time for a quantum computer to decode the Hawking radiation emitted by most black holes (which is a necessary step in some of the Firewall arguments.)

The conference schedule was intense, but during our free day, probably half of the ~100 attendees went on a bus excursion to the Masada and the Dead Sea. The photo above shows the group taking a short break inside the Masada. [Photo cred to Sandra Rankovic.]

This experience even taught me an important life lesson that I’d like to share with you all: never leave your car outside for a month. I had an unwanted surprise when I returned home after this splendid workshop. The interior cabin of my car was completely covered with rat poop! It gets worse. Rats literally turned my car into a nest while I was away. They basically unraveled the majority of the car’s electrical wiring and insulation and created a huge nest. The damage was worth >70% the value of the car. This led to a low 48 hours, but insurance eventually came to the rescue in a big way. I actually had a similar problem at Stanford University a few years ago, but on a much smaller scale, so I was aware that this was a thing (fool me twice…) However, my car was outside my parents’ house near the beach in Southern California, where I’ve never heard of such incidents. Anyways, I’ll buy an ultrasonic rodent repeller before my next international trip. Yes, I’ll be that guy.

3 thoughts on “Reporting from the ‘Frontiers of Quantum Information Science’”