I spent the past two weeks profoundly confused. I’ve been trying to get up to speed on this firewall business and I wanted to understand the picture below.

Much confuse. Such lost. [Is doge out of fashion now? I wouldn’t know because I’ve been trapped in a black hole!]

[Technical paragraph that you can skip.] I’ve been trying to understand why the picture on the left is correct, even though my intuition said the middle picture should be (intuition should never be trusted when thinking about quantum gravity.) The details of these pictures are technical and tangential to this post, but the brief explanation is that these pictures are called Penrose diagrams and they provide an intuitive way to think about the time dynamics of black holes. The two diagrams on the left represent the same physics as the schematic diagram on the right. I wanted to understand why during Hawking radiation, the radial momentum for partner modes is in the same direction. John Preskill gave me the initial reasoning, that “radial momentum is not an isometry of Schwarzchild or Rindler geometries,” then I struggled for a few weeks to unpack this, and then Dan Harlow rescued me with some beautiful derivations that make it crystal clear that the picture on the left is indeed correct. I wanted to understand this because if the central picture is correct, then it would be hard to catch up to an infalling Hawking mode and therefore to verify firewall weirdness. The images above are simple enough, but maybe the image below will give you a sense for how much of an uphill battle this was!

This pretty much sums up my last two weeks (with the caveat that each of these scratch sheets is double sided!) Or in case you wanted to know what a theoretical physicist does all day.

After four or five hours of maxing out my brain, it starts to throb. For the past couple of weeks, after breaking my brain with firewalls each day, I’ve been switching gears and reading about black hole astronomy (real-life honest-to-goodness science with data!) Beyond wanting to know the experimental state-of-the-art related to the fancy math I’ve been thinking about, I also had the selfish motivation that I wanted to do some PR maintenance after Nature’s headline: “Stephen Hawking: ‘There are no black holes’.” I found this headline infuriating when Nature posted it back in January. When taken out of context, this quote makes it seem like Stephen Hawking was saying “hey guys, my bad, we’ve been completely wrong all this time. Turn off the telescopes.” When in reality what he was saying was more like: “hey guys, I think this really hard modern firewall paradox is telling us that we’ve misunderstood an extremely subtle detail and we need to make corrections on the order of a few Planck lengths, but it matters!” When you combine this sensationalism with Nature’s lofty credibility, the result is that even a few of my intelligent scientist peers have interpreted this as the non-existence of astrophysical black holes. Not to mention that it opens a crack for the news media to say things like: ‘if even Stephen Hawking has been wrong all this time, then how can we possibly trust the rest of this scientist lot, especially related to climate change?’ So brain throbbing + sensationalism => learning black hole astronomy + PR maintenance.

Before presenting the evidence, I should wave my hands about what we’re looking for. You have all heard about black holes. They are objects where so much mass gets concentrated in such a small volume that Einstein’s general theory of relativity predicts that once an object passes beyond a certain distance (called the event horizon), then said object will never be able to escape, and must proceed to the center of the black hole. Even photons cannot escape once they pass beyond the event horizon (except when you start taking quantum mechanics into account, but this is a small correction which we won’t focus on here.) All of our current telescopes collect photons, and as I just mentioned, when photons get close to a black hole, they fall in, so this means a detection with current technology will only be indirect. What are these indirect detections we have made? Well, general relativity makes numerous predictions about black holes. After we confirm enough of these predictions to a high enough precision, and without a viable alternative theory, we can safely conclude that we have detected black holes. This is similar to how many other areas of science work, like particle physics finding new particles through detecting a particle’s decay products, for example.

Without further ado, I hope the following experimental evidence will convince you that black holes permeate our universe (and if not black holes, then something even weirder and more interesting!)

1. Sgr A*: There is overwhelming evidence that there is a supermassive black hole at the center of our galaxy, the Milky Way. As a quick note, most of the black holes we have detected are broken into two categories, solar mass, where they are only a few times more massive than our sun (5-30 solar masses), or supermassive, where the mass is about

solar masses. Some of the most convincing evidence comes from the picture below. Andrea Ghez and others tracked the orbits of several stars around the center of the Milky Way for over twenty years. We have learned that these stars orbit around a point-like object with a mass on the order of

solar masses. Measurements in the radio spectrum show that there is a radio source located in the same location which we call Sagittarius A* (Sgr A*). Sgr A* is moving at less than

and has a mass of at least 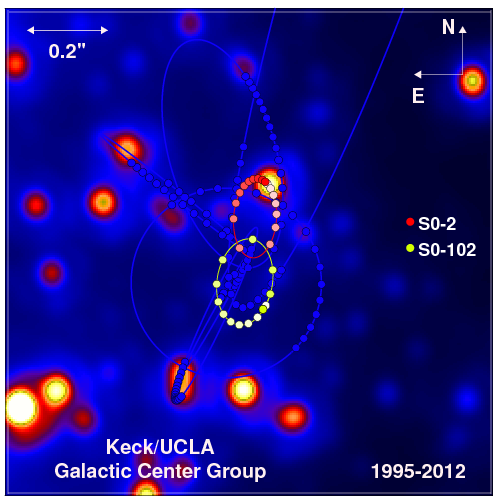 What are you looking at? This plot shows the orbits of a few stars around the center of our galaxy, tracked over 17 years!

2. Orbit of S2: During a recent talk that Andrea Ghez gave at Caltech, she said that S2 is “her favorite star.” S2 is a 15 solar mass star located near the black hole at the center of our galaxy. S2’s distance from this black hole is only about four times the distance from Neptune to the Sun (at closest point in orbit), and it’s orbital period is only 15 years. The Keck telescopes in Mauna Kea have followed almost two complete orbits of S2. This piece of evidence is redundant compared to point 1, but it’s such an amazing technological feat that I couldn’t resist including it. 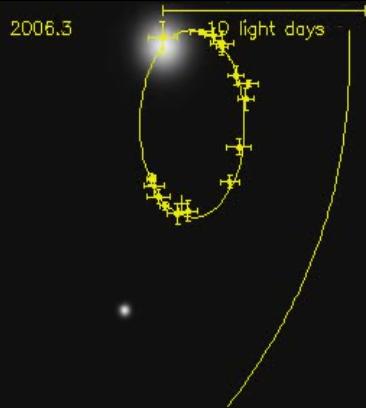 We’ve followed S2’s complete orbit. Is it orbiting around nothing? Something exotic that we have no idea about? Or much more likely around a black hole.

3. Numerical studies: astrophysicists have done numerous numerical simulations which provide a different flavor of test. Christian Ott at Caltech is pretty famous for these types of studies.

Image from a numerical simulation that Christian Ott and his student Evan O’Connor performed.

4. Cyg A: Cygnus A is a galaxy located in the Cygnus constellation. It is an exceptionally bright radio source. As I mentioned in point 1, as dust falls towards a black hole, friction causes it to heat up and then hot objects radiate away photons. The image below demonstrates this. We are able to use the Eddington limit to convert luminosity measurements into estimates of the mass of Cyg A. Not necessarily in the case of Cyg A, but in the case of its cousins Active Galactic Nuclei (AGNs) and Quasars, we are also able to put bounds on their sizes. These two things together show that there is a huge amount of mass trapped in a small volume, which is therefore probably a black hole (alternative models can usually be ruled out.) 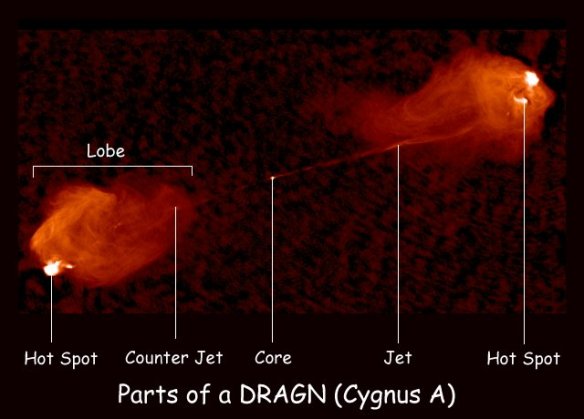 There is a supermassive black hole at the center of this image which powers the rest of this action! The black hole is spinning and it emits relativistic jets along its axis of rotation. The blobs come from the jets colliding with the intergalactic medium.

5. AGNs and Quasars: these are bright sources which are powered by supermassive black holes. Arguments similar to those used for Cyg A make us confident that they really are powered by black holes and not some alternative.

6. X-ray binaries: astronomers have detected ~20 stellar mass black holes by finding pairs consisting of a star and a black hole, where the star is close enough that the black hole is sucking in its mass. This leads to accretion which leads to the emission of X-Rays which we detect on Earth. Cygnus X-1 is a famous example of this.

That’s only eight reasons but I hope you’re convinced that black holes really exist! To round out this list to include ten things, here are two interesting open questions related to black holes:

1. Firewalls: I mentioned this paradox at the beginning of this post. This is the cutting edge of quantum gravity which is causing hundreds of physicists to pull their hair out!

2. Feedback: there is an extremely strong correlation between the size of a galaxy’s supermassive black hole and many of the other properties in the galaxy. This connection was only realized about a decade ago and trying to understand how the black hole (which has a mass much smaller than the total mass of the galaxy) affects galaxy formation is an active area of research in astrophysics.

In addition to everything mentioned above, I want to emphasize that most of these results are only from the past decade. Not to mention that we seem to be close to the dawn of gravitational wave astronomy which will allow us to probe black holes more directly. There are also exciting instruments that have recently come online, such as NuSTAR. In other words, this is an extremely exciting time to be thinking about black holes–both from observational and theoretical perspectives–we have data and a paradox! In conclusion, black holes exist. They really do. And let’s all make a pact to read critically in the 21st century!

Cool resource from Sky and Telescope.

[* I want to thank my buddy Kaes Van’t Hof for letting me crash on his couch in NYC last week, which is where I did most of this work. ** I also want to thank Dan Harlow for saving me months of confusion by sharing a draft of his notes from his course on firewalls at the Israeli Institute for Advanced Study’s winter school in theoretical physics.]