Yesterday was a special day. And no I’m not referring to #BlackFriday — but rather to #BlackHoleFriday. I just learned that NASA spawned this social media campaign three years ago. The timing of this year’s Black Hole Friday is particularly special because we are exactly 100 years + 2 days after Einstein published his field equations of general relativity (GR). When Einstein introduced his equations he only had an exact solution describing “flat space.” These equations are notoriously difficult to solve so their introduction sent out a call-to-arms to mathematically-minded-physicists and physically-minded-mathematicians who scrambled to find new solutions.

If I had to guess, Karl Schwarzschild probably wasn’t sleeping much exactly a century ago. Not only was he deployed to the Russian Front as a solider in the German Army, but a little more than one month after Einstein introduced his equations, Schwarzschild was the first to find another solution. His solution describes the curvature of spacetime outside of a spherically symmetric mass. It has the incredible property that if the spherical mass is compact enough then spacetime will be so strongly curved that nothing will be able to escape (at least from the perspective of GR; we believe that there are corrections to this when you add quantum mechanics to the mix.) Schwarzchild’s solution took black holes from the realm of clever thought experiments to the status of being a testable prediction about how Nature behaves.

It’s worth mentioning that between 1916-1918 Reissner and Nordstrom generalized Schwarzschild’s solution to one which also has electric charge. Kerr found a solution in 1963 which describes a spinning black hole and this was generalized by Newman et al in 1965 to a solution which includes both spin (angular momentum) and electric charge. These solutions are symmetric about their spin axis. It’s worth mentioning that we can also write sensible equations which describe small perturbations around these solutions.

And that’s pretty much all that we’ve got in terms of exact solutions which are physically relevant to the 3+1 dimensional spacetime that we live in (it takes three spatial coordinates to specify a meeting location and another +1 to specify the time.) This is the setting that’s closest to our everyday experiences and these solutions are the jumping off points for trying to understand the role that black holes play in astrophysics. As I already mentioned, studying GR using pen and paper is quite challenging. But one exciting direction in the study of astrophysical black holes comes from recent progresses in the field of numerical relativity; which discretizes the calculations and then uses supercomputers to study approximate time dynamics. 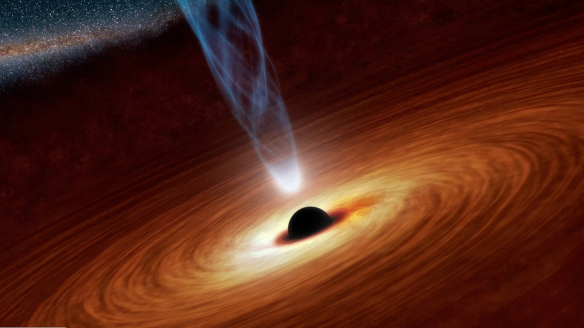 Artist’s rendition of dust+gas in an “accretion disk” orbiting a spinning black hole. Friction in the accretion disk generates temperatures oftentimes exceeding 10M degrees C (2000 times the temperature of the Sun.) This high temperature region emits x-rays and other detectable EM radiation. The image also shows a jet of plasma. The mechanism for this plasma jet is not yet well understood. Studying processes like this requires all of tools that we have available to us: from numerical relativity; to cutting edge space observatories like NuSTAR; to LIGO in the immediate future *hopefully.* Image credit: NASA/Caltech-JPL

I don’t expect many of you to be experts in the history outlined above. And I expect even fewer of you to know that Einstein’s equations still make sense in any number of dimensions. In this context, I want to briefly introduce a 2+1 dimensional solution called the BTZ black hole and outline why it has been astonishingly important since it was introduced 23 years ago by Bañados, Teteilboim and Zanelli (their paper has been cited over 2k times which is a tremendous number for theoretical physics.)

One of the most striking implications of Einstein’s theory of general relativity is that our universe is described by a curved geometry which we call spacetime. Einstein’s equations describe the dynamical interplay between the curvature of spacetime and the distribution of energy+matter. This may be counterintuitive, but there are many solutions even when there is no matter or energy in the spacetime. We call these vacuum solutions. Vacuum solutions can have positive, negative or zero “curvature.“

As 2d surfaces: the sphere is positively curved; a saddle has negative curvature; and a plane has zero curvature.

It came as a great surprise when BTZ showed in 1992 that there is a vacuum solution in 2+1d which has many of the same properties as the more physical 3+1d black holes mentioned above. But most excitingly — and something that I can’t imagine BTZ could have anticipated — is that their solution has become the toy model of all toy models for trying to understand “quantum gravity.”

GR in 2+1d has many convenient properties. Two beautiful things that happen in 2+1d are that:

Some “multiboundary wormhole” pictures that I made. The left shows the constant time=0 slice for a few different solutions and what you are left with after gluing according to the equations on the right. These are solutions to GR in 2+1d.

These properties make 2+1d GR particularly useful as a sandbox for making progress towards a theory of quantum gravity. As examples of what this might entail:

A few years after the holographic principle was introduced in the early 1990’s, by Gerard ‘t Hooft and Lenny Susskind, Juan Maldacena came up with a concrete manifestation which is now called the AdS/CFT correspondence. Maldacena’s paper has been cited over 14k times making it one of the most cited theoretical physics papers of all time. However, despite having a “correspondence” it’s still very hard to translate questions back and forth between the “gravity and quantum sides” in practice. The BTZ black hole is the gravity solution where this correspondence is best understood. Its quantum dual is a state called the thermofield double, which is given by:

. This describes a quantum state which lives on two circles (see my BTZ picture above.) There is entanglement between the two circles. If an experimentalist only had access to one of the circles and if they were asked to try to figure out what state they have, their best guess would be a “thermal state.” A state that has been exposed to a heat-bath for too long and has lost all of its initial quantum coherence.

It is in this sense that the BTZ black hole has been hugely important. It’s also evidence of how mysterious Einstein’s equations still remain, even to this day. We still don’t have exact solutions for many settings of interest, like for two black holes merging in 3+1d. It was only in 1992 that BTZ came up with their solution–77 years after Einstein formulated his theory! Judging by historical precedence, exactly solvable toy models are profoundly useful and BTZ has already proven to be an important signpost as we continue on our quest to understand quantum gravity. There’s already broad awareness that astrophysical black holes are fascinating objects. In this post I hope I conveyed a bit of the excitement surrounding how black holes are useful in a different setting — in aiding our understanding of quantum gravity. And all of this is in the spirit of #BlackHoleFriday, of course.