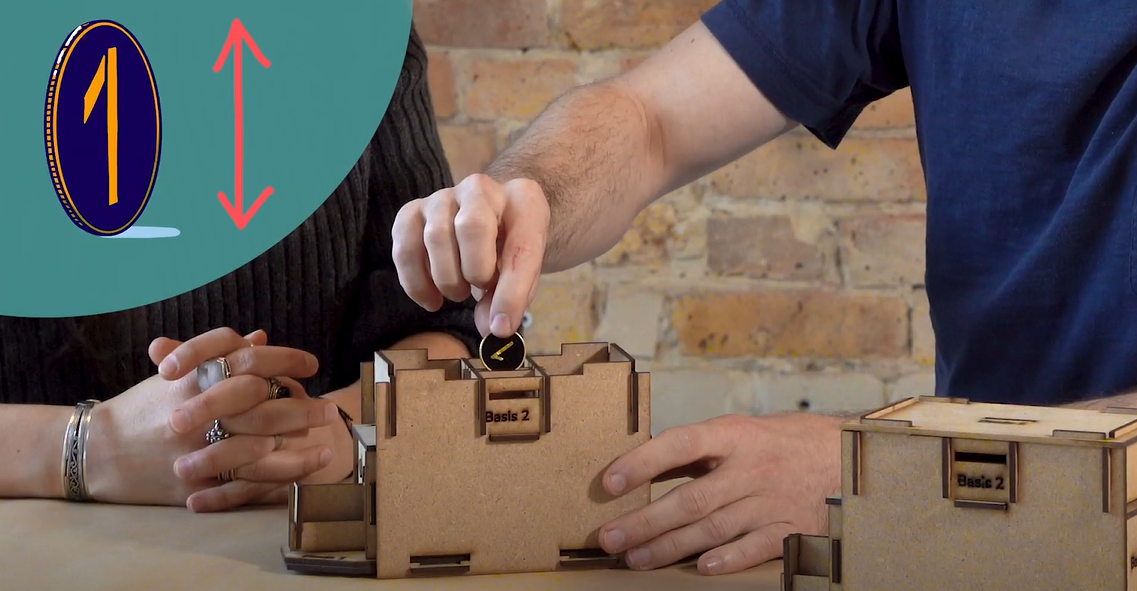 Over the last few decades, transistor density has become so high that classical computers have run into problems with some of the quirks of quantum mechanics. Quantum computers, on the other hand, exploit these quirks to revolutionize the way computers work. They promise secure communications, simulation of complex molecules, ultrafast computations, and much more. The fear of being left behind as this new technology develops is now becoming pervasive around the world. As a result, there are large, near-term investments in developing quantum technologies, with parallel efforts aimed at attracting young people into the field of quantum information science and engineering in the long-term.

I was not surprised then that, after completing my master’s thesis in quantum optics at TU Berlin in Germany, I was invited to participate in a program called Quanten 1×1 and hosted by the Junge Tueftler (Young Tinkerers) non-profit, to get young people excited about quantum technologies. As part of a small team, we decided to develop tabletop games to explain the concepts of superposition, entanglement, quantum gates, and quantum encryption. In the sections that follow, I will introduce the thought process that led to the design of one of the final products on quantum encryption. If you want to learn more about the other games, you can find the relevant links at the end of this post.

The price of admission into the quantum realm

How much quantum mechanics is too much? Is it enough for people to know about the health of Schrödinger’s cat, or should we use a squishy ball with a smiley face and an arrow on it to get people excited about qubits and the Bloch sphere? In other words, what is the best way to go beyond metaphors and start delving into the real stuff? After all, we are talking about cutting-edge quantum technology here, which requires years of study to understand. Even the quantum experts I met with during the project had a hard time explaining their work to lay people.

Since there is no standardized way to explain these topics outside a university, the goal of our project was to try different models to teach quantum phenomena and make the learning as entertaining as possible. Compared to methods where people passively absorb the information, our tabletop-games approach leverages people’s curiosity and leads to active learning through trial and error.

Most of the (sensitive) information that is transmitted over the Internet is encrypted. This means that only those with the right “secret key” can unlock the digital box and read the private message within. Without the secret key used to decrypt, the message looks like gibberish – a series of random characters. To encrypt the billions of messages being exchanged every day (over 300 billion emails alone), the Internet relies heavily on public-key cryptography and so-called one-way functions. These mathematical functions allow one to generate a public key to be shared with everyone, from a private key kept to themselves. The public key plays the role of a digital padlock that only the private key can unlock. Anyone (human or computer) who wants to communicate with you privately can get a digital copy of your padlock (by copying it from a pinned tweet on your Twitter account, for example), put their private message inside a digital box provided by their favorite app or Internet communication protocol running behind the scenes, lock the digital box using your digital padlock (public-key), and then send it over to you (or, accidentally, to anyone else who may be trying to eavesdrop). Ingeniously, only the person with the private key (you) can open the box and read the message, even if everyone in the world has access to that digital box and padlock.

But there is a problem. Current one-way functions hide the private key within the public key in a way that powerful enough quantum computers can reveal. The implications of this are pretty staggering. Your information (bank account, email, bitcoin wallet, etc) as currently encrypted will be available to anyone with such a computer. This is a very serious issue of global importance. So serious indeed, that the President of the United States recently released a memo aimed at addressing this very issue. Fortunately, there are ways to fight quantum with quantum. That is, there are quantum encryption protocols that not even quantum computers can break. In fact, they are as secure as the laws of physics.

A popular way of illustrating how quantum encryption works is through single photon sources and polarization filters. In classroom settings, this often boils down to lasers and small polarizing filters a few meters apart. Although lasers are pretty cool, they emit streams of photons (particles of light), not single photons needed for quantum encryption. Moreover, measuring polarization of individual photons (another essential part of this process) is often very tricky, especially without the right equipment. In my opinion the concept of quantum mechanical measurement and the collapse of wave functions is not easily communicated in this way.

Inspired by wooden toys and puzzles my mom bought for me as a kid after visits to the dentist, I tried to look for a more physical way to visualize the experiment behind the famous BB84 quantum key distribution protocol. After a lot of back and forth between the drawing board and laser cutter, the first quantum key generator (QeyGen) was built.

How does the box work?

Note: This short description leaves out some details. For a deeper dive, I recommend watching the tutorial video on our Youtube channel.

The quantum key generator (QeyGen) consists of an outer and an inner box. The outer box is used by the person generating the secret key, while the inner box is used by the person with whom they wish to share that key. The sender prepares a coin in one of two states (heads = 0, tails = 1) and inserts it either into slot 1 (horizontal basis), or slot 2 (vertical basis) of the outer box. The receiver then measures the state of the coin in one of the same two bases by sliding the inner box to the left (horizontal basis = 1) or right (vertical basis = 2). Crucially, if the bases to prepare and measure the coin match, then both sender and receiver get the same value for the coin. But if the basis used to prepare the coin doesn’t match the measurement basis, the value of the coin collapses into one of the two allowed states in the measurement basis with 50/50 chance. Because of this design, the box can be used to illustrate the BB84 protocol that allows two distant parties to create and share a secure encryption key.

The following is a step by step tutorial on how to play out the BB84 protocol with the QeyGen. You can play it with two (Alice, Bob) or three (Alice, Bob, Eve) people. It is useful to know right from the start that this protocol is not used to send private messages, but is instead used to generate a shared private key that can then be used with various encryption methods, like the one-time pad, to send secret messages.

Sharing the key while checking for eavesdroppers:

Note that the more rounds Alice and Bob choose for the eavesdropper detection, the higher the chance that the channel of communication is secure, since N rounds that all return the same value for the coin mean a

chance that Eve got lucky and guessed Alice’s inputs correctly. To put this in perspective, a 20-round check for Eve provides a 99.9999% guarantee of security. Of course, the more rounds used to check for Eve, the fewer secure bits are left for Alice and Bob to share at the end. On average, after a total of 2(N+M) rounds, with N rounds dedicated to Eve, we get an M-bit secret key.

What do people learn?

When we play with the box, we usually encounter three main topics that we discuss with the participants.

I hope that this small outline has provided a rough idea of how the box works and why we developed it. If you have access to a laser cutter, I highly recommend making a QeyGen for yourself (link to files below). For any further questions, feel free to contact me at t.schubert@fu-berlin.de.

The program was funded by the Federal Ministry of Education and Research (Germany) and was a collaboration between the Jungen Tueftlern and the Technical University of Berlin.
A special thanks to Robert from Project Sci.Com who helped me with the development.