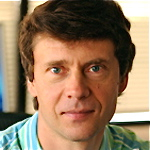 Alexei is thinking of putting some of the award money into education efforts. “My success is in large part due to good education, my teachers and the atmosphere of excitement in science when I grew up,” he is quoted as saying to the New York Times.

Alexei Kitaev, Professor of Physics, Computer Science, and Mathematics at Caltech, has received the Fundamental Physics Prize. This prize, which is being awarded for the first time, was established by Internet billionaire and one-time particle theorist Yuri Milner. The prize citation recognizes Kitaev’s “theoretical idea of implementing robust quantum memories and fault-tolerant quantum computation using topological quantum phases with anyons and unpaired Majorana modes.” As one of nine recipients, he will receive three million dollars.

Kitaev’s 1997 paper on Fault-tolerant quantum computation by anyons proposed exploiting exotic two-dimensional quantum states of matter for robust storage and processing of quantum information. Later, in the 2000 paper Unpaired Majorana fermions in quantum wires, he made a more concrete proposal to store quantum information robustly in suitably configured one-dimensional systems. The key insight behind both proposals is that when a quantum state is distributed non-locally among many elementary objects, it can be well protected from damage due to uncontrolled interactions with its environment. Kitaev’s ideas are now being vigorously pursued by theorists and experimentalists around the world, and in particular by researchers here at the IQIM.

Concerning the monetary value of the award, Milner explained: “I wanted to send a message that fundamental science is important, so the sum had to be significant.”