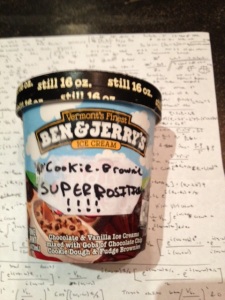 Oh my, I ate the whole thing again. Are physicists eligible for Ben and Jerry’s sponsorships?

I’m not sure what covers more ground when I go for a long run — my physical body or my metaphorical mind? Chew on that one, zen scholar! Anyways, I basically wrote the following post during my most recent run, and I also worked up an agressive appetite for Ben and Jerry’s ice cream. I’m going to reward myself after writing this post by devouring a pint of “half-baked” brown-kie ice cream (you can’t find this stuff in your local store.)

The goal of this series of blog posts is to explain quantum teleportation and how Caltech built a machine to do this. The tricky aspect is that there are two foundational elements of quantum information that need to be explained first — they’re both phenomenally interesting in their own right, but substantially subtler than a teleportation device, so the goal with this series is to explain qubits and entanglement at a level which will allow you to appreciate what our teleportation machine does (and after explaining quantum teleportation, hopefully some of you will be motivated to dive deeper into the subtleties of quantum information.) This post will explain entanglement.

Before explaining entanglement, I want to remind you that a qubit is a superposition of two states:

It’s not exclusively in either state, it’s still in limbo, with a proclivity towards each of its two possible states governed by probabilities:

. The qubit chooses between the two states when it’s measured for the first time.

In a nutshell, entanglement is the idea that there can be non-classical correlations between qubits. We can generate entangled pairs of qubits, such as

where the subscripts stand for Alice and Bob, respectively. They each get one qubit. Now, setting

, we can look back at the previous paragraph to see what we expect to get after measuring this state’s two qubits: with probability 1/2, Alice and Bob’s qubits are in the state

(cookies), and with probability 1/2 their qubits are in the state

(brownies). The important thing is that their qubits always agree in this special quantum state (remember, the state

is really the two-qubit state

and, similarly, the state

is actually the state

). So, if Alice measures first, and then Bob second, with probability one, they will get the same outcome. The same is true if Bob measures first or if they measure at the same time. They always either both have cookies or both have brownies. However, similar to before (see Intro to qubits), something special happens when the first measurement is performed. Before that point, the qubits haven’t yet made up their mind about whether to be cookies or brownies. After a measurement, Alice and Bob are left with either both cookies or both brownies. Returning to our notation, the wavefunction

has collapsed to either

In some sense, this is our first taste of teleportation. It’s subtle, but when Alice performs a measurement on her qubit in the entangled pair

, she instantaneously alters Bob’s qubit to match hers no matter how far apart their qubits are!

I also want to mention that after creating qubits, the coefficients (related to probabilities) aren’t permanently fixed. We can perform unitary operations (rotations in a mathematical space where distances and angles between objects exist), which alter the probabilities of whether Alice and Bob will both have cookies or both have brownies. This is similar to performing logical operations on bits in a computer. For example, a bit flip takes 0 -> 1 and 1 -> 0 and is called a NOT gate. A NOT gate is actually a simple unitary operation: If the 0 is the north pole of a sphere and the 1 is the south pole, then the NOT gate is a rotation that takes the north pole to the south pole and the south pole to the north pole. Our quantum teleportation protocol, and quantum computation more generally, fundamentally rely upon these unitary operations, where qubits are represented by vectors pointing at the surface of three-dimensional spheres (see Bloch sphere) and unitary operations act as rotations on these spheres. 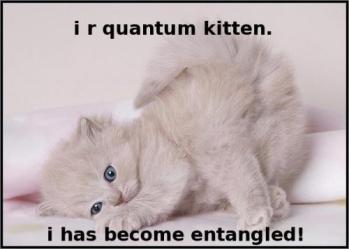 Entangled qubits are much cuter.

In an attempt to be concrete, let’s assume that Alice and Bob start off on Earth at Caltech’s IQIM, where they generate an entangled state (quantum brown-kies in their respective refrigerators). Bob then spends a few months flying to Mars (my Caltech/JPL friends who had to wait for the Mars Science Laboratory to make this journey sympathize with Bob. Unfortunately, I’m not cool enough to be friends with the Mohawk Guy.) The distance between Mars and Earth obviously varies, but on average it takes about ten minutes for light to travel between the two. After Bob is safely settled on Mars (with the help of JPL of course), let’s say that Alice and Bob coordinate so that Alice will reach into her refrigerator and pull out her dessert and then Bob will do so moments later (in the appropriate reference frame, because we’re starting to get relativistic.) They then send signals to each other documenting which dessert they obtained. Ten minutes later, they will learn that they each grabbed the same dessert. They always grab the same dessert.

Another future post in this series will explain how we actually build entangled qubits. Here are two loose examples to keep in mind in the interim: we can generate pairs of photons (particles of light) which must have either the same or opposite polarizations. Another example could include pairs of atoms which have the same nuclear spin, along some predetermined axis. You can imagine a particle decay process where conservation laws say that two sub-particles must have the same spin, but that whether they are both up or down depends on the spin of the original particle, whose spin might have been prepared in a superposition itself.

To summarize, we have seen that qubits are superpositions of two-state systems and have introduced entanglement as a universal resource that allows the measurement of one qubit to affect the state of another, instantaneously. Now, we are finally ready to tackle quantum teleportation… which I’ll do in my next post. For now, I’ll leave you with a skeleton of the teleportation schema:

Mission: Transmit an arbitrary bit of quantum information (qubit) between two distant laboratories using only an easy-to-generate entangled pair (such as an EPR pair) and two bits of classical communication (“00”, “01”, “10”, “11”).

Step 0: Two physicists, Alice and Bob, set up distant laboratories from which they will perform quantum teleportation.

Step 1: They generate entangled states at one of the labs.

Step 2: They spread these states between their laboratories.

In conclusion, Quantum teleportation allows Alice and Bob to send quantum information between distant laboratories using only classical information and generic entanglement (which could have been generated ahead of time.) Maybe someday you’ll be able to send the full description of some piece of electronics to a distant 3D printer and have a duplicate printed there — not just a duplicate of the ‘off’ mode of the electronics, but its exact current state. Or a research group in Pasadena will be able to send the complete description of a new material to collaborators in Vienna. Maybe even someday this will penetrate to biology. Maybe we’ll even generate a reservoir of entanglement by shining a laser onto a distant asteroid. My next post will describe the quantum teleportation protocol and its applications more thoroughly. For now, I’m going to enjoy my Ben and Jerry’s (I’ll get off this schtick soon enough.)

40 thoughts on “How to build a teleportation machine: Intro to entanglement”