Most of Caltech’s contingent during QIP’s banquet. Not pictured: sword dancers, jug balancers and Gorjan.

A couple of weeks ago, about half of IQI (now part of IQIM) flew from Pasadena to Beijing in order to attend QIP 2013, the 16th annual workshop on quantum information processing. I wish I could report that the quantum information community solved the world’s problems over the past year, or at least built a 2^10 qubit universal quantum computer, but unfortunately, we’re not quite there yet. As a substitute, I’ll mention a few of the talks that I particularly enjoyed and the really hard open problems that they left us with.

The emphases of the talks mainly bifurcated towards computer science versus physics. I was better prepared to understand the talks emphasizing the latter, so my comments will mainly describe those talks. Patrick Hayden’s talk: “summoning information in spacetime: or where and when can a qubit be?” was one of my favorites. To the extent that I understood things, the goal of this work is to better understand how quantum information can propagate forward in time. If a qubit were created at spacetime location S, and then if it were forced to remain localized, the no-cloning theorem would give strict bounds regarding how it could move forward in time. The qubit would follow a worldline and that would be the end of things. However, qubits don’t need to remain localized, as teleportation experiments have pretty clearly demonstrated, and it therefore seems like qubits can propagate into the future in more subtle ways–ways that at face value appear to violate the no-cloning theorem. Patrick and the undergraduate that he worked with on this project, Alex May, came up with a pictorial approach to better understand these subtleties. The really hard open problems that these ideas could potentially be applied to include: firewalls, position-dependent quantum cryptography and to paradoxes concerning the apparent no-cloning violations near black hole event horizons.

Fernando Brandão gave a very nice talk showing that exponential decays of correlations imply an area law in 1 dimension. In layman’s terms, imagine you have a long “pearl necklace” where the pearls are actually atoms. The spins of these atoms are correlated: if one atom has spin pointing up, then it’s neighbors are most likely to also have their spins pointing up. It’s long been hypothesized that if the atomic system in question has correlations between atomic spins which decay exponentially in the distance between atoms, then in order to understand the entanglement between different subsets of the system, you only need a small amount of information–a description of the states at the boundaries of the different subsystems. Anyways, Fernando and his co-author, Michael Horodecki, first used a concept from quantum information, data-hiding states, to test the veracity of this area law assumption (data-hiding states seemed to be a natural counter-example.) The intuition they gleaned from studying these states, allowed them to use tools from quantum information to prove an area law in 1D. More specifically, they did this using the quantum state merging protocol, the quantum substate theorem, properties of single-shot smooth entropies along with some other tools that they developed/improved. Their paper lists quite a few open problems, probably the most challenging of which is to extend the result to higher dimensions 🙂

I also enjoyed the physics review talks given by David DiVincenzo and Liang Jiang. David DiVincenzo reviewed the “prospects for superconducting qubits,” and overall, I would say left a very optimistic impression about how far that field has come over the past fifteen years, and where it is going (hopefully fault-tolerant quantum computation in the near/mid term future!) Liang Jiang‘s talk gave a background about Majorana fermions, described how they could be used to perform topological quantum computation, and explained the difficulties in interpreting recent experimental results attempting to detect Majoranas. I found his clarification of the difficulties surrounding these 1D quantum wire experiments particularly enlightening. I should also mention that Liang was a postdoc at IQI/IQIM until he joined the Yale faculty this past Fall. 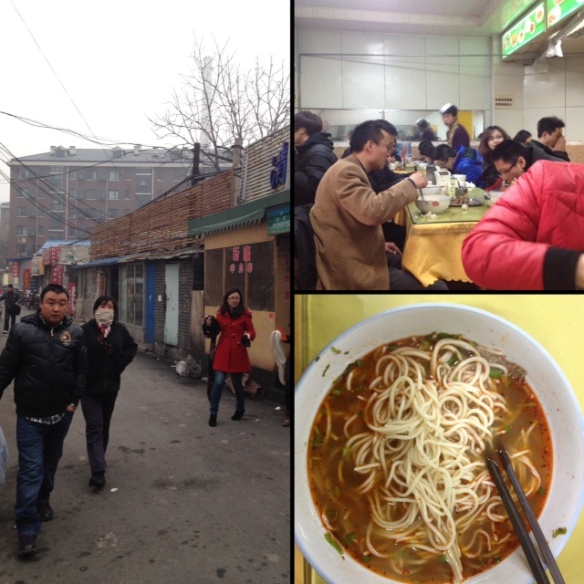 Other highlights included Stephen Jordan’s talk about “quantum algorithms for quantum field theories.” This is joint work with Keith Lee and our very own, John Preskill. Maybe we’ll get a blog post about this work? Anyways, other conference highlights came from the rump session. Steve Flammia roasted Aram Harrow during their presentation of scirate (which you should all check out). Basically, they had technical difficulties while presenting a technical product and Steve diffused tension by treating Aram like a younger brother (euphemism for child). John Smolin gave a hilarious, but simultaneously serious, talk showing that arbitrarily large numbers can be factored using a very simple constant-size ‘quantum’ circuit. My personal highlight was roaming random hutongs in an attempt to satisfy my craving for oily noodle soups (see above).