As a mathematician, I often wonder if life would have been easier were I born 2,400 years ago. Back then, all you had to do to become eternally famous was to show that

( I am looking at you Πυθαγόρα!) OK, maybe I am not giving the Ancients enough credit. I mean, they didn’t have an iPhone back then, so they probably had to do

by hand. All kidding aside, they did generalize the previous equality to other large numbers like

(I am feeling a little sassy today, I guess.) Still, back then, mathematics did not start as an abstract subject about relations between numbers. It grew from a naive attempt to control elements of design that were essential to living, like building airplanes and plasma TVs. The Greeks didn’t succeed then and, if I am not mistaken, they still haven’t succeeded in making either airplanes, or plasma TVs. But, back then at least, my ancestors made some beautiful buildings. Like the Parthenon. 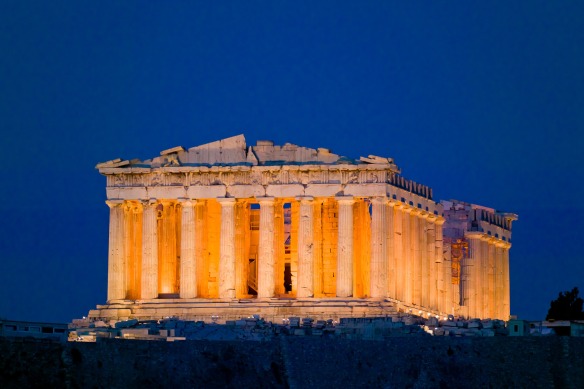 The temple of Athina (the Goddess of Wisdom, which gave her name to the city we now call Athens after a fierce contest with Poseidon – imagine flying into Poseidonia every time you visited Greece had she lost) was designed to be seen from far away and inspire awe in those who wished to conquer the city-state of Athens. But, those who were granted access to the space behind the doric columns, came face to face with the second divine woman to ever make Zeus stand in attention, whenever she met her dad on legendary Mt. Olympus: Αθηνά. And so, Φειδίας (Phidias), that most famous of ancient Greek sculptors, decided to immortalize Athina’s power with a magnificent statue, a tribute to the effortless grace with which she personified the wisdom of an ancient culture in harmony with the earth’s most precious gift – feta cheese. 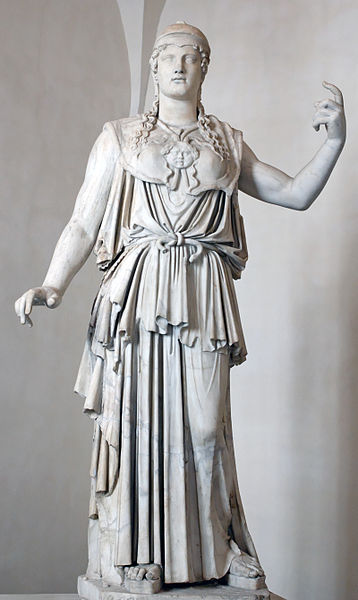 Here she is, playing an invisible electric cello next to Yo-Yo Ma (also invisible). And yes, she liked to work out.

OK, I may be biased on this one. For Greeks, virgin olive oil and φέτα cheese go like peanut butter and jelly (I didn’t even know the last two went so well together, until I left Greece for the country of America!) Oh yeah, you are probably wondering what feta cheese and olive oil have to do with the Goddess of Wisdom. Well, how do you think she won over the Athenians, against Zeus’ almighty brother, Poseidon? The olive branch, of course. The sea is good and all (actually, the sea is pretty freakin’ amazing in Greece), but you can’t eat it with feta – you can preserve feta in brine (salt water), which is why Poseidon had a fighting chance in the first place – but, yeah, not good enough. Which brings us to the greatest rival, nay – nemesis, of the first letter with an identity crisis,

. You are most likely familiar with the letter-number

(you may have even seen the modern classic, American Pie, a tour-de-force, honest look at the life of Pi. No pun intended.) But, what about the number

? Well, I could tell you all about this number,

, named after the sculptor dude above, but I ‘d rather you figure out its history on your own through this simple math problem:

The divine proportion: Does there exist a function