Last Friday the 13th was a lucky day for those who love physics — The online html version of Volume 1 of the Feynman Lectures on Physics (FLP) was released! Now anyone with Internet access and a web browser can enjoy these unique lectures for free. They look beautiful. 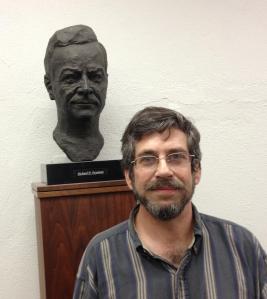 On the day of release, over 86,000 visitors viewed the website, and the Amazon sales rank of the paperback version of FLP leapt over the weekend from 67,000 to 12,000. My tweet about the release was retweeted over 150 times (my most retweets ever).

Free html versions of Volumes 2 and 3 are in preparation. Soon pdf versions of all three volumes will be offered for sale, each available in both desktop and tablet versions at a price comparable to the cost of the paperback editions. All these happy developments resulted from a lot of effort by many people. You can learn about some of the history and the people involved from Kip Thorne’s 2010 preface to the print edition.

A hero of the story is Mike Gottlieb, who spends most of his time in Costa Rica, but passed through Caltech yesterday for a brief visit. Mike entered the University of Maryland to study mathematics at age 15 and at age 16 began a career as a self-employed computer software consultant. In 1999, when Mike was 39,  a chance meeting with Feynman’s friend and co-author Ralph Leighton changed Mike’s life.

At Ralph’s suggestion, Mike read Feynman’s Lectures on Computation. Impressed by Feynman’s insights and engaging presentation style, Mike became eager to learn more about physics; again following Ralph’s suggestion, he decided to master the Feynman Lectures on Physics. Holed up at a rented farm in Costa Rica without a computer, he pored over the lectures for six months, painstakingly compiling a handwritten list of about 200 errata.

Kip’s preface picks up the story at that stage. I won’t repeat all that, except to note two pivotal developments. Rudi Pfeiffer was a postdoc at the University of Vienna in 2006 when, frustrated by the publisher’s resistance to correcting errata that he and others had found, he (later joined by Gottlieb) began converting FLP to LaTeX, the modern computer system for typesetting mathematics. Eventually, all the figures were redrawn in electronic form as scalable vector graphics, paving the way for a “New Millenium Edition” of FLP (published in 2011), as well as other electronically enhanced editions planned for the future. Except that, before all that could happen, Caltech’s Intellectual Property Counsel Adam Cochran had to untangle a thicket of conflicting publishing rights, which I have never been able to understand in detail and therefore will not attempt to explain.

Rudi Pfeiffer and Mike Gottlieb at Caltech in 2008.

The proposal to offer an html version for free has been enthusiastically pursued by Caltech and has received essential financial support from Carver Mead. The task of converting Volume 1 from LaTeX to html was carried out for a fee by Caltech alum Michael Hartl; Gottlieb is doing the conversion himself for the other volumes, which are already far along.

Aside from the pending html editions of Volumes 2 and 3, and the pdf editions of all three volumes, there is another very exciting longer-term project in the works — the html will provide the basis for a Multimedia Edition of FLP. Audio for every one of Feynman’s lectures was recorded, and has been digitally enhanced by Ralph Leighton. In addition, the blackboards were photographed for almost all of the lectures. The audio and photos will be embedded in the Multimedia Edition, possibly accompanied by some additional animations and “Ken Burns style” movies. The audio in particular is great fun, bringing to life Feynman the consummate performer. For the impatient, a multimedia version of six of the lectures is already available as an iBook. To see a quick preview, watch Adam’s TEDxCaltech talk.

Mike Gottlieb has now devoted 13 years of his life to enhancing FLP and bringing the lectures to a broader audience, receiving little monetary compensation. I asked him yesterday about his motivation, and his answer surprised me somewhat. Mike wants to be able to look back at his life feeling that he has made a bigger contribution to the world than merely writing code and making money. He would love to have a role in solving the great open problems in physics, in particular the problem of reconciling general relativity with quantum mechanics, but feels it is beyond his ability to solve those problems himself. Instead, Mike feels he can best facilitate progress in physics by inspiring other very talented young people to become physicists and work on the most important problems. In Mike’s view, there is no better way of inspiring students to pursue physics than broadening access to the Feynman Lectures on Physics!