Once upon a time, a Russian tsar named Nikita had forty daughters:

Every one from top to toe
Was a captivating creature,
Perfect—but for one lost feature.

So wrote Alexander Pushkin, the 19th-century Shakespeare who revolutionized Russian literature. In a rhyme, Pushkin imagined forty princesses born without “that bit” “[b]etween their legs.” A courier scours the countryside for a witch who can help. By summoning the devil in the woods, she conjures what the princesses lack into a casket. The tsar parcels out the casket’s contents, and everyone rejoices.

“[N]onsense,” Pushkin calls the tale in its penultimate line. A “joke.”

The joke has, nearly two centuries later, become reality. Researchers have grown vaginas in a lab and implanted them into teenage girls. Thanks to a genetic defect, the girls suffered from Mayer-Rokitansky-Küster-Hauser (MRKH) syndrome: Their vaginas and uteruses had failed to grow to maturity or at all. A team at Wake Forest and in Mexico City took samples of the girls’ cells, grew more cells, and combined their harvest with vagina-shaped scaffolds. Early in the 2000s, surgeons implanted the artificial organs into the girls. The patients, the researchers reported in the journal The Lancet last week, function normally.

I don’t usually write about reproductive machinery. But the implants’ resonance with “Tsar Nikita” floored me. Scientists have implanted much of Pushkin’s plot into labs. The sexually deficient girls, the craftsperson, the replacement organs—all appear in “Tsar Nikita” as in The Lancet. In poetry as in science fiction, we read the future.

Though threads of Pushkin’s plot survive, society’s view of the specialist has progressed. “Deep [in] the dark woods” lives Pushkin’s witch. Upon summoning the devil, she locks her cure in a casket. Today’s vagina-implanters star in headlines. The Wall Street Journal highlighted the implants in its front section. Unless the patients’ health degrades, the researchers will likely list last week’s paper high on their CVs and websites. 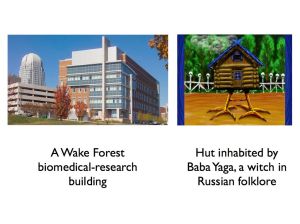 Much as Dr. Atlántida Raya-Rivera, the paper’s lead author, differs from Pushkin’s witch, the visage of Pushkin’s magic wears the nose and eyebrows of science. When tsars or millenials need medical help, they seek knowledge-keepers: specialists, a fringe of society. Before summoning the devil, the witch “[l]ocked her door . . . Three days passed.” I hide away to calculate and study (though days alone might render me more like the protagonist in another Russian story, Chekhov’s “The Bet”). Just as the witch “stocked up coal,” some students stockpile Red Bull before hitting the library. Some habits, like the archetype of the wise woman, refuse to die.

From a Russian rhyme, the bones of “Tsar Nikita” have evolved into cutting-edge science. Pushkin and the implants highlight how attitudes toward knowledge have changed, offering a lens onto science in culture and onto science culture. No wonder readers call Pushkin “timeless.”

But what would he have rhymed with “Mayer-Rokitansky-Küster-Hauser”?

“Tsar Nikita” has many nuances—messages about censorship, for example—that I didn’t discuss. To the intrigued, I recommend The Queen of Spades: And selected works, translated by Anthony Briggs and published by Pushkin Press.

7 thoughts on “Tsar Nikita and His Scientists”