I’m old enough to remember when cutting and pasting were really done with scissors and glue (or Scotch tape). When I was a graduate student in the late 1970s, few physicists typed their own papers, and if they did they left gaps in the text, to be filled in later with handwritten equations. The gold standard of technical typing was the IBM Correcting Selectric II typewriter. Among its innovations was the correction ribbon, which allowed one to remove a typo with the touch of a key. But it was especially important for scientists that the Selectric could type mathematical characters, including Greek letters. 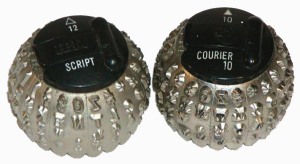 It wasn’t easy. Many different typeballs were available, to support various fonts and special characters. Typing a displayed equation or in-line equation usually involved swapping back and forth between typeballs to access all the needed symbols. Most physics research groups had staff who knew how to use the IBM Selectric and spent much of their time typing manuscripts.

Though the IBM Selectric was used by many groups, typewriters have unique personalities, as forensic scientists know. I had a friend who claimed he had learned to recognize telltale differences among documents produced by various IBM Selectric machines. That way, whenever he received a referee report, he could identify its place of origin.

Manuscripts did not evolve through 23 typeset versions in those days, as one of my recent papers did. Editing was arduous and frustrating, particularly for a lowly graduate student like me, who needed to beg Blanche to set aside what she was doing for Steve Weinberg and devote a moment or two to working on my paper.

It was tremendously liberating when I learned to use TeX in 1990 and started typing my own papers. (Not LaTeX in those days, but Plain TeX embellished by a macro for formatting.) That was a technological advance that definitely improved my productivity. An earlier generation had felt the same way about the Xerox machine.

But as I was reminded a few days ago, while technological advances can be empowering, they can also be dangerous when used recklessly. I was editing a very long document, and decided to make a change. I had repeatedly used $x$ to denote an n-bit string, and thought it better to use $\vec x$ instead. I was walking through the paper with the replace button, changing each $x$ to $\vec x$ where the change seemed warranted. But I slipped once, and hit the “Replace All” button instead of “Replace.” My computer curtly informed me that it had made the replacement 1011 times. Oops …

This was a revocable error. There must have been a way to undo it (though it was not immediately obvious how). Or I could have closed the file without saving, losing some recent edits but limiting the damage.

But it was late at night and I was tired. I panicked, immediately saving and LaTeXing the file. It was a mess.

Okay, no problem, all I had to do was replace every \vec x with x and everything would be fine. Except that in the original replacement I had neglected to specify “Match Case.” In 264 places $X$ had become $\vec x$, and the new replacement did not restore the capitalization. It took hours to restore every $X$ by hand, and there are probably a few more that I haven’t noticed yet.

Which brings me to the cautionary tale of one of my former graduate students, Robert Navin. Rob’s thesis had two main topics, scattering off vortices and scattering off monopoles. On the night before the thesis due date, Rob made a horrifying discovery. The crux of his analysis of scattering off vortices concerned the singularity structure of a certain analytic function, and the chapter about vortices made many references to the poles of this function. What Rob realized at this late stage is that these singularities are actually branch points, not poles!

What to do? It’s late and you’re tired and your thesis is due in a few hours. Aha! Global search and replace! Rob replaced every occurrence of “pole” in his thesis by “branch point.” Problem solved.

Rob Navin no longer does physics, but has been very successful in finance. I’m sure he’s more careful now.