I’d come to Barnes and Noble to study and to submerse in the bustle. I needed reminding that humans other than those on my history exam existed. When I ran out of tea and of names to review, I stood, stretched, and browsed the shelves. A blue-bound book caught my eye: Don’t Sweat the Small Stuff…and it’s all small stuff.

Richard Carlson wrote that book for people like me. We have packing lists, grocery lists, and laundry lists of to-do lists. We transcribe lectures. We try to rederive equations that we should just use. Call us “detail-oriented”; call us “conscientious”; we’re boring as toast, and we have earlier bedtimes. When urged to relax, we try. We might not succeed, but we try hard.

For example, I do physics instead of math. Mathematicians agonize over what-ifs: “What if this bit of the fraction reaches one while that bit goes negative and the other goes loop-the-loop? We’d be dividing by zero!” Divisions by zero atom-bomb calculations. Since dividing by a tiny number amounts to multiplying by a large number, dividing by zero amounts to multiplying by infinity. While mathematicians chew their nails over infinities, physicists often assume we needn’t. We use math to represent physical systems like pendulums and ponytails.1 Ponytails have properties, like lacking infinite masses, that don’t smack of the apocalypse. Since those properties don’t, neither does the math that represents those properties. To justify assumptions that our math “behaves nicely,” we use the jargon, “the field goes to zero at the boundary,” “the coupling’s renormalized,” and “it worked last time.”

I tried not to sweat the small stuff. I tried to shrug off the question marks at calculations’ edges. Sometimes, I succeeded. Then I began a Masters thesis about epsilons. 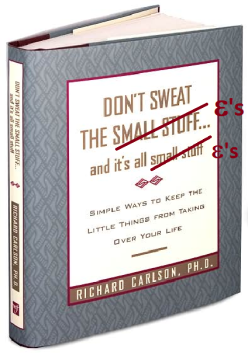 In many physics problems, the Greek letter epsilon (ε) means “-ish.” The butcher sold you epsilon-close to a pound of beef? He tipped the scale a tad in your favor. Your temperature dropped from 103 to epsilon-close to normal? Stay in bed this afternoon, and you should recover by tomorrow.

For half a year, I’ve used epsilons to describe transformations between quantum states. To visualize the transformations, say you have a fistful of coins. Each coin consists of gold and aluminum. The portion of the coin that’s gold varies from coin to coin. I want a differently-sized fistful of coins, each with a certain gold content. After melting down your fistful, can you cast the fistful I want? Can you cast a fistful that’s epsilon-close to the fistful I want? I calculated answers to those questions, after substituting “quantum states” for “fistfuls” and a property called “purity” for “gold.”2

You might expect epsilon-close conversions to require less effort than exact conversions: Butchers weigh out approximately a pound of beef more quickly than they weigh a pound. But epsilon-close math requires more effort than exact math. Introducing epsilons into calculations, you introduce another number to keep track of. As that number approaches zero, approximate conversions become exact. If that number approaches zero while in a denominator, you atom-bomb calculations with infinities. The infinities remind me of geysers in a water park of quantum theory.

Have you visited a water park where geysers erupt every few minutes? Have you found a geyser head that looks dead, and crouched to check it? Epsilons resemble dead-looking geyser heads. Just as geyser heads rise only inches from the ground, epsilons have values close to zero. Say you’ve divided by epsilon, and you’re lowering its value to naught. Hitch up your swimsuit, lower your head, and squint at the faucet. Farther you crouch, and farther, till SPLAT! Water shoots up your left nostril.

Infinities have been shooting up my left nostril for months.

Rocking back on your heels, you need a towel. Dividing by an epsilon that approaches zero, I need an advisor. An advisor who knows mounds of calculus, who corrects without crushing, and who doesn’t mind my bombarding him with questions once a week. I have one, thank goodness—an advisor, not a towel.3 I wouldn’t trade him for fifty fistfuls of gold coins.

Towel in hand, I tiptoed through the water park of epsilons. I learned how quickly geysers erupt, where they appear, and how to disable some. I learned about smoothed distributions, limits superior, and Asymptotic Equipartition Properties. Though soaked after crossing the park, I survived. I submitted my thesis last week. And I have the right—should I find the chutzpah—to toss off the word “epsilonification” like a spelling-bee champ.

Had I not sweated the epsilons, I wouldn’t have finished the thesis. Should I discard Richard Carlson’s advice? I can’t say, having returned to my history review instead of reading his book. But I don’t view epsilons as troubles to sweat or not. Why not view epsilons as geysers in the water park of quantum theory? Who doesn’t work up a sweat in a park? But I wouldn’t rather leave. And maybe—if enough geysers shoot up our left nostrils—we’ll learn a smidgeon about Old Faithful.

1 I’m not kidding about ponytails.

2 Quantum whizzes: I explored a resource theory like that of pure bipartite entanglement (e.g., http://arxiv.org/abs/quant-ph/9811053). Instead of entanglement or gold, nonuniformity (distance from the maximally mixed state) is a scarce resource. The uniform (maximally mixed state) has no worth, like aluminum. This “resource theory of nonuniformity” models thermodynamic systems whose Hamiltonians are trivial (H = 0).

3 Actually, I have two advisors, and I’m grateful for both. But one helped cure my epsilons. N.B. I have not begun working at Caltech.