Few settings foster equanimity like Canada’s Banff International Research Station (BIRS). Mountains tower above the center, softened by pines. Mornings have a crispness that would turn air fresheners evergreen with envy. The sky looks designed for a laundry-detergent label. 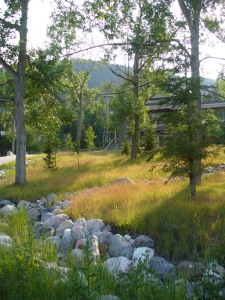 One day into my visit, equilibrium shattered my equanimity.

Joe Renes and I had extended these resource theories. Thermodynamic systems can exchange quantities other than energy and information. Imagine white-bean soup cooling on a stovetop. Gas condenses on the pot’s walls, and liquid evaporates. The soup exchanges not only heat, but also particles, with its environment. Imagine letting the soup cool for ages. It would thermalize to the grand canonical ensemble,

. Joe and I had modeled systems that exchange diverse thermodynamic observables.*

What if, fellow beyond-i.i.d.-er Jonathan Oppenheim asked, those observables didn’t commute with each other?

represent a system’s energy, and let

Suppose that our quantum circuit has observables represented by noncommuting operators

. The circuit cannot have a well-defined energy and a well-defined particle number simultaneously. Physicists call this inability the Uncertainty Principle. Uncertainty and noncommutation infuse quantum mechanics as a Cashmere GlowTM infuses a Downy fabric softener.

I glowed at Jonathan: All the coolness in Canada couldn’t have pleased me more than finding someone interested in that question.** Suppose that a quantum system exchanges observables

with the environment. Suppose that

of quantum angular momentum. Would the system thermalize? Would the thermal state have the form

? Could we model the system with a resource theory?

Jonathan proposed that we chat.

The chat sucked in beyond-i.i.d.-ers Philippe Faist and Andreas Winter. We debated strategies while walking to dinner. We exchanged results on the conference building’s veranda. We huddled over a breakfast table after colleagues had pushed their chairs back. Information flowed from chalkboard to notebook; energy flowed in the form of coffee; food particles flowed onto the floor as we brushed crumbs from our notebooks.

Exchanges of energy and particles.

The idea morphed and split. It crystallized months later. We characterized, in three ways, the thermal state of a quantum system that exchanges noncommuting observables with its environment. 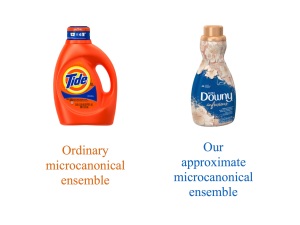 Suppose that our system and its environment occupy this approximate microcanonical ensemble. Tracing out (mathematically ignoring) the environment yields the system’s thermal state. The thermal state basically has the form we expected,

This exponential state, we argued, follows also from time evolution. The white-bean soup equilibrates upon exchanging heat and particles with the kitchen air for ages. Our quantum system can exchange observables

with its environment for ages. The system equilibrates, we argued, to the state

. The argument relies on a quantum-information tool called canonical typicality.

Three path lead to the form

of the thermal state of a quantum system that exchanges noncommuting observables with its environment. We published the results this summer.

Not only was Team Banff spilling coffee over

. So were teams at Imperial College London and the University of Bristol. Our conclusions overlap, suggesting that everyone calculated correctly. Our methodologies differ, generating openings for exploration. The mountain passes between our peaks call out for mapping.

So does the path to physical reality. Do these thermal states form in labs? Could they? Cold atoms offer promise for realizations. In addition to experiments and simulations, master equations merit study. Dynamical typicality, Team Banff argued, suggests that

as its fixed point? Email me if you have leads!

Experimentalists, can you realize the thermal state

A photo of Banff could illustrate Merriam-Webster’s entry for “equanimity.” Banff equanimity deepened our understanding of quantum equilibrium. But we wouldn’t have understood quantum equilibrium if questions hadn’t shattered our tranquility. Give me the disequilibrium of recognizing problems, I pray, and the equilibrium to solve them.

*By “observable,” I mean “property that you can measure.”

**Teams at Imperial College London and Bristol asked that question, too. More pleasing than three times the coolness in Canada!

5 thoughts on “Upending my equilibrium”