“BBs,” the lecturer said. I was sitting in the center of my row of seats, the two yards between me and the whiteboard empty. But I fancied I hadn’t heard correctly. “You know, like in BB guns?”

I had heard correctly. I nodded.

“Did you play with BB guns when you were a kid?”

“I had BB guns,” the lecturer ruminated. “I had to defend myself from my brothers.”

I nodded more vigorously. My brother and I love each other, but we’ve crossed toy pistols.

Kids begged less for BB guns, in my experience, than for water guns. I grew up in Florida, where swimming season stretches from April till September. To reload a BB gun, you have to fetch spent BBs. But, toting a Supersoaker, you swim in ammunition.

Water guns brought to mind water waves, which resemble a species of classical light. If BBs resemble photons, I mused, what about Supersoaker sprays? Water balloons?

I resolved to draw as many parallels as I could between species of light and childhood weapons.

But Supersoaker sprays differ from incoherent light in other respects. I’d expect triggers, for instance, to introduce nonlinearity into the spray’s dynamics. Readers who know more than I about fluid mechanics can correct me. 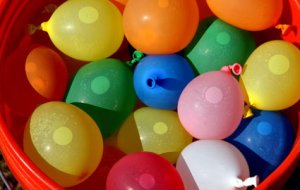 Though far-reaching and forceful, Supersoakers weigh down combatants and are difficult to hide. If you need ammunition small enough for a sneak attack, I recommend water balloons. Water balloons resemble squeezed states, which form a quantum class of light related to the Uncertainty Principle.

Imagine plotting the possible positions along a graph’s horizontal axis and the possible momenta along the vertical. The points that could characterize our quantum system form a blob of area ћ/2. Doesn’t the blob resemble a water balloon?

Depiction of a squeezed state

Not all childhood weapons contain water or BBs, and not all states of light contain photons.** A vacuum is a state that consists of zero photons. Classical physics suggests that the vacuum is empty and lacks energy. A sliver of energy, called zero-point energy, pervades each quantum vacuum. The Uncertainty Principle offers one reason why.

The vacuum reminds me of the silent treatment. Silence sounds empty, but it can harbor malevolence as quantum vacua harbor energy. Middle-school outcasts beware zero-point malice.

Retreating up Memory Lane, I ran out of analogies between classes of light and childhood weapons. Children play with lasers (with laser pointers and laser-tag guns), and lasers emit (approximately) coherent light. But laser light’s resemblance to laser light doesn’t count as an analogy. The class of incoherent light includes thermal states. (Non-experts, I’m about to spew jargon. If you have the energy, I recommend Googling the italicized terms. If you haven’t, feel free to skip to the next paragraph.) Physicists model much of the natural world with thermal states. To whichever readers identify childhood weapons that resemble them, I offer ten points. I offer 20 for mimicry of solitons or solitary waves, and 25 for that of parametric down-conversion or photon antibunching.

But if sunshine and Supersoakers lure you away from your laptop, I can’t object. Happy summer.

With thanks to Bassam Helou for corrections and discussions.

*Pardon my simplifying inaccuracy. Some nonquantum physics is nonclassical.

**More precisely, not all Fock states correspond to particle numbers

. Alternatively: Not all states of light correspond to positive expectation values

of the particle-number operator

11 thoughts on “Of Supersoakers and squeezed states”