The archaeologist Howard Carter discovered Tutankhamun’s burial site in 1922. No other Egyptian pharaoh’s tomb had survived mostly intact until the modern era. Gold and glass and faience, statues and pendants and chariots, had evaded looting. The discovery would revolutionize the world’s understanding of, and enthusiasm for, ancient Egypt.

First, the artifacts had to leave the tomb.

Tutankhamun lay in three coffins nested like matryoshka dolls. Carter describes the nesting in his book The Tomb of Tutankhamen. Lifting the middle coffin from the outer coffin raised his blood pressure:

Everything may seem to be going well until suddenly, in the crisis of the process, you hear a crack—little pieces of surface ornament fall. Your nerves are at an almost painful tension. What is happening? All available room in the narrow space is crowded by your men. What action is needed to avert a catastrophe?

In other words, “What’s the worst that could happen?” 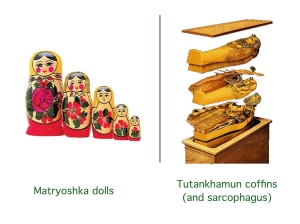 Collaborators and I asked that question in a paper published last month. We had in mind less Egyptology than thermodynamics and information theory. But never mind the distinction; you’re reading Quantum Frontiers! Let’s mix the fields like flour and oil in a Biblical grain offering.

Carter’s team had trouble separating the coffins: Ancient Egyptian priests (presumably) had poured fluid atop the innermost, solid-gold coffin. The fluid had congealed into a brown gunk, gluing the gold coffin to the bottom of the middle coffin. Removing the gold coffin required work—thermodynamic work.

required to stretch a spring depends on the spring’s stiffness (the gunk’s viscosity) and on the distance stretched through.

depends also on details: How many air molecules struck the gold coffin from above, opposing the team’s effort? How quickly did Carter’s team pull? Had the gunk above Tuankhamun’s nose settled into a hump or spread out? How about the gunk above Tutankhamun’s left eye socket? Such details barely impact the work required to open a 6.15-foot-long coffin. But air molecules would strongly impact

if Tutankhamun measured a few nanometers in length. So imagine Egyptian matryoshka dolls as long as stubs of DNA.

Imagine that Carter found one million sets of these matryoshka dolls. Lifting a given set’s innermost coffin would require an amount

would satisfy fluctuation relations, equalities I’ve blogged about many times.

than the Second Law does.

Some predictions concern dissipated work: Carter’s team could avoid spending much work by opening the coffin infinitesimally slowly. Speeding up would heat the gunk, roil air molecules, and more. The heating and roiling would cost extra work, called dissipated work, denoted by

Suppose that Carter’s team has chosen a lid-opening speed

that the team might have to waste on any nanoscale coffin.

is proportional to each of three information-theoretic quantities, my coauthors and I proved.

For experts: Each information-theoretic quantity is an order-infinity Rényi divergence

quantifies how efficiently one can distinguish between probability distributions, or quantum states,

on average. The average is over many runs of a guessing game.

Imagine the worst possible run, which offers the lowest odds of guessing correctly.

quantifies your likelihood of winning. We related

between two statistical-mechanical phase-space distributions (when we described classical systems), to a

between two quantum states (when we described quantum systems), and to a

(when we described systems quantum and classical).

The worst case marks an extreme. How do the extremes consistent with physical law look? As though they’ve escaped from a mythologist’s daydream.

In an archaeologist’s worst case, arriving at home in the evening could lead to the following conversation:

“I accidentally eviscerated a 3.5-thousand-year-old artifact—the most valuable, best-preserved, most information-rich, most lavishly wrought ancient Egyptian coffin that existed yesterday.”

Suppose that the archaeologist lived with a physicist. My group (guided by a high-energy physicist) realized that the conversation could continue as follows:

“I created a black hole.”

General relativity and high-energy physics have begun breeding with quantum information and thermodynamics. The offspring bear extremes like few other systems imaginable. I wonder what our results would have to say about those offspring. 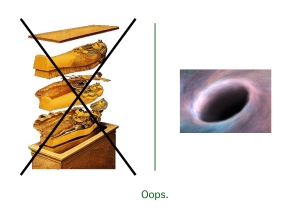 National Geographic reprinted Carter’s The Tomb of Tutankhamen in its “Adventure Classics” series. The series title fits Tomb as a mummy’s bandages fit the mummy. Carter’s narrative stretches from Egypt’s New Kingdom (of 3.5 thousand years ago) through the five-year hunt for the tomb (almost fruitless until the final season), to a water boy’s discovery of steps into the tomb, to the unsealing of the burial chamber, to the confrontation of Tutankhamun’s mummy.

Carter’s book guided me better than any audio guide could have at the California Science Center. The center is hosting the exhibition “King Tut: Treasures of the Golden Pharaoh.” After debuting in Los Angeles, the exhibition will tour the world. The tour showcases 150 artifacts from Tutankhamun’s tomb.

Those artifacts drove me to my desk—to my physics—as soon as I returned home from the museum. Tutankhamun’s tomb, Carter argues in his book, ranks amongst the 20th century’s most important scientific discoveries. I’d seen a smidgeon of the magnificence that Carter’s team— with perseverance, ingenuity, meticulousness, and buckets of sweat shed in Egypt’s heat—had discovered. I don’t expect to discover anything a tenth as magnificent. But how can a young scientist resist trying?

Postscript: Carter’s team failed to unglue the gold coffin by just “stretching” the gunky “spring.” The team resorted to heat, a thermodynamic quantity alternative to work: The team flipped the middle coffin upside-down above a heat lamp. The lamp raised the temperature to 932°F, melting the goo. The melting, with more work, caused the gold coffin to plop out of the middle coffin.

2 thoughts on “What’s the worst that could happen?”