“This is your arch-nemesis.”

The thank-you slide of my presentation remained onscreen, and the question-and-answer session had begun. I was presenting a seminar about thermodynamic resource theories (TRTs), models developed by quantum-information theorists for small-scale exchanges of heat and work. The audience consisted of condensed-matter physicists who studied graphene and photonic crystals. I was beginning to regret my topic’s abstractness.

The question-asker pointed at a listener.

“This is an experimentalist,” he continued, “your arch-nemesis. What implications does your theory have for his lab? Does it have any? Why should he care?”

I could have answered better. I apologized that quantum-information theorists, reared on the rarefied air of Dirac bras and kets, had developed TRTs. I recalled the baby steps with which science sometimes migrates from theory to experiment. I could have advocated for bounding, with idealizations, efficiencies achievable in labs. I should have invoked the connections being developed with fluctuation results, statistical mechanical theorems that have withstood experimental tests.

The crowd looked unconvinced, but I scored one point: The experimentalist was not my arch-nemesis.

“My new friend,” I corrected the questioner.

His question has burned in my mind for two years. Experiments have inspired, but not guided, TRTs. TRTs have yet to drive experiments. Can we strengthen the connection between TRTs and the natural world? If so, what tools must resource theorists develop to predict outcomes of experiments? If not, are resource theorists doing physics? 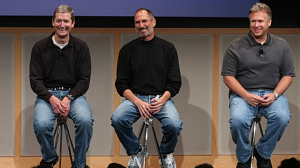 A Q&A more successful than mine.

I explore answers to these questions in a paper released today. Ian Durham and Dean Rickles were kind enough to request a contribution for a book of conference proceedings. The conference, “Information and Interaction: Eddington, Wheeler, and the Limits of Knowledge” took place at the University of Cambridge (including a graveyard thereof), thanks to FQXi (the Foundational Questions Institute).

What, I asked my advisor, does one write for conference proceedings?

“Proceedings are a great opportunity to get something off your chest,” John said.

That seminar Q&A had sat on my chest, like a pet cat who half-smothers you while you’re sleeping, for two years. Theorists often justify TRTs with experiments.* Experimentalists, an argument goes, are probing limits of physics. Conventional statistical mechanics describe these regimes poorly. To understand these experiments, and to apply them to technologies, we must explore TRTs.

Does that argument not merit testing? If experimentalists observe the extremes predicted with TRTs, then the justifications for, and the timeliness of, TRT research will grow. 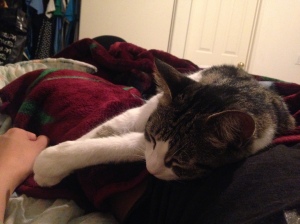 Something to get off your chest. Like the contents of a conference-proceedings paper, according to my advisor.

You’ve read the paper’s introduction, the first eight paragraphs of this blog post. (Who wouldn’t want to begin a paper with a mortifying anecdote?) Later in the paper, I introduce TRTs and their role in one-shot statistical mechanics, the analysis of work, heat, and entropies on small scales. I discuss whether TRTs can be realized and whether physicists should care. I identify eleven opportunities for shifting TRTs toward experiments. Three opportunities concern what merits realizing and how, in principle, we can realize it. Six adjustments to TRTs could improve TRTs’ realism. Two more-out-there opportunities, though less critical to realizations, could diversify the platforms with which we might realize TRTs.

One opportunity is the physical realization of thermal embezzlement. TRTs, like thermodynamic laws, dictate how systems can and cannot evolve. Suppose that a state

cannot transform into a state

. Catalysts act like engines used to extract work from a pair of heat baths.

. For certain definitions of “resembles,”** TRTs imply, one can extract arbitrary amounts of work by negligibly degrading

The spirit, not the letter. Embezzlement seems physically realizable, in principle. Detecting embezzlement could push experimentalists’ abilities to distinguish between close-together states

. I hope that that challenge, and the chance to violate the spirit of thermodynamic law, attracts researchers. Alternatively, theorists could redefine “resembles” so that 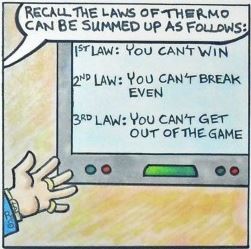 The paper’s broadness evokes a caveat of Arthur Eddington’s. In 1927, Eddington presented Gifford Lectures entitled The Nature of the Physical World. Being a physicist, he admitted, “I have much to fear from the expert philosophical critic.” Specializing in TRTs, I have much to fear from the expert experimental critic. The paper is intended to point out, and to initiate responses to, the lack of physical realizations of TRTs. Some concerns are practical; some, philosophical. I expect and hope that the discussion will continue…preferably with more cooperation and charity than during that Q&A.

If you want to continue the discussion, drop me a line.

*So do theorists-in-training. I have.

**A definition that involves the trace distance.

4 thoughts on “Toward physical realizations of thermodynamic resource theories”