A polar vortex had descended on Chicago.

I was preparing to fly in, scheduled to present a seminar at the University of Chicago. My boyfriend warned, from Massachusetts, that the wind chill effectively lowered the temperature to -50 degrees F. I’d last encountered -50 degrees F in the short story “To Build a Fire,” by Jack London. Spoiler alert: The protagonist fails to build a fire and freezes to death.

The story exemplifies naturalism, according to my 11th-grade English class. The naturalist movement infiltrated American literature and art during the late 19th century. Naturalists portrayed nature as as harsh and indifferent: The winter doesn’t care if Jack London’s protagonist dies.

The protagonist lingered in my mind as my plane took off. I was flying into a polar vortex for physics, the study of nature. Physics doesn’t care about me. How can I care so much about physics? How can humans generally?

Peeling apart that question, I found more layers than I’d packed for protection against the polar vortex. 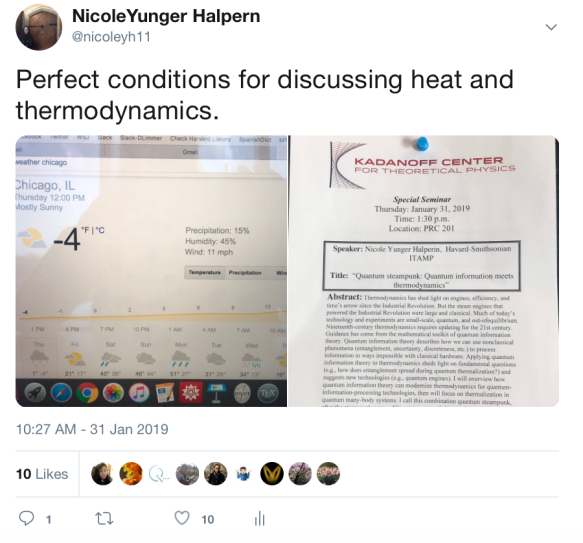 Intellectualism formed the parka of the answer: You can’t hug space, time, information, energy, and the nature of reality. You can’t smile at them and watch them smile back. But their abstractness doesn’t block me from engaging with them; it attracts me. Ideas attract me; their purity does. Physics consists partially of a framework of ideas—of mathematical models, of theorems and examples, of the hypotheses and plots and revisions that underlie a theory.

The framework of physics needs construction. Some people compose songs; some build businesses; others bake soufflés; I used to do arts and crafts. Many humans create—envision, shape, mold, and coordinate—with many different materials. Theoretical physics overflows with materials and with opportunities to create. As humans love to create, we can love physics. Theoretical-physics materials consist of ideas, which might sound less suited to construction than paint does. But painters glob mixtures of water, resin, acrylic, and pigment onto woven fabric. Why shouldn’t ideas appeal as much as resin does? I build worlds in my head for a living. Doesn’t that sound romantic?

Painters derive joy from painting; dancers derive joy from moving; physics offers outlets for many skills. Doing physics, I use math. I learn history: What paradoxes about quantum theory did Albert Einstein pose to Niels Bohr? I write papers and blog posts, and I present seminars and colloquia. I’ve moonlighted as a chemist, studied biology, dipped into computer science, and sought to improve engineering. Beyond these disciplines, physics requires uniquely physical skills: the identification of questions about the natural world, the translation of those questions into math, and the translation of mathematical results into statements about the natural world. In college, I hated having to choose a major because I wanted to study everything. Physics lets me.

My attraction to physics worried me in college. Jim Yong Kim became Dartmouth’s president in my junior year. Jim, who left to helm the World Bank, specializes in global health. He insisted that “the world’s troubles are your troubles,” quoting former Dartmouth president John Sloan Dickey. I was developing a specialization in quantum information theory. I wasn’t trying to contain ebola, mitigate droughts, or eradicate Alzheimer’s disease. Should I not have been trying to save the world?

I could help save the world, a mentor said, through theoretical physics.1 Society needs a few people to develop art, a few to write music, a few to curate history, and a few to study the nature of the universe. Such outliers help keep us human, and the reinforcement of humanity helps save the world. You may indulge in physics, my mentor said, because physics affords the opportunity to do good. If I appreciate that opportunity, how can I not appreciate physics?

The opportunity to do good has endeared physics to me more as I’ve advanced. The more I advance, the fewer women I see. According to the American Physical Society (APS), in 2017, women received about 21% of the physics Bachelor’s degrees awarded in the U.S. Women received about 18% of the doctorates. In 2010, women numbered 8% of the full professors in U.S. departments that offered Bachelor’s or higher degrees in physics. The APS is conducting studies, coordinating workshops, and offering grants to improve the gender ratio. Departments, teachers, and mentors are helping. They have my gratitude. Yet they can accomplish only so much, especially since many are men. They can encourage women to change the gender ratio; they can’t change the ratio directly. Only women can, and few women are undertaking the task. Physics affords an opportunity to do good—to improve a field’s climate, to mentor, and to combat stereotypes—that few people can tackle. For that opportunity, I’m grateful to physics.

Physics lifts us beyond the Platonic realm of ideas in two other ways. At Caltech, I once ate lunch with Charlie Marcus. Marcus is a Microsoft researcher and a professor of physics at the University of Copenhagen’s Niels Bohr Institute. His lab is developing topological quantum computers, in which calculations manifest as braids. Why, I asked, does quantum computing deserve a large chunk of Marcus’s life?

Two reasons, he replied. First, quantum computing straddles the border between foundational physics and applications. Quantum science satisfies the intellect but doesn’t tether us to esoterica. Our science could impact technology, industry and society. Second, the people. Quantum computing has a community steeped in congeniality.

Marcus’s response delighted me: His reasons for caring about quantum computing coincided with two of mine. Reason two has expanded, in my mind, to opportunities for engagement with people. Abstractions attract me partially because intellectualism runs in my family. I grew up surrounded by readers, encouraged to ask questions. Physics enables me to participate in a family tradition and to extend that tradition to the cosmos. My parents now ask me the questions—about black holes and about whether I’m staying warm in Chicago.

Beyond family, physics enables me to engage with you. This blog has connected me to undergraduates, artists, authors, computer programmers, science teachers, and museum directors across the world. Scientific outreach inspires reading, research, art, and the joy of learning. I love those outcomes, participating in them, and engaging with you. 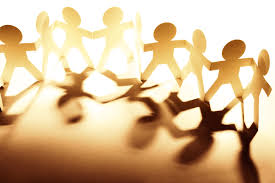 Why fly into a polar vortex for the study of nature—why care about physics that can’t care about us? In my case, primarily because of the ideas, the abstraction, and the chances to create and learn. Partially for the chance to help save the world through humanness, outreach, and a gender balance. Partially for the chance to impact technology, and partially to connect with people: Physics can strengthen ties to family and can introduce you to individuals across the globe. And physics can— heck, tomorrow is February 14th—lead you to someone who cares enough to track Chicago’s weather from Cambridge.

1I’m grateful that Jim Kim, too, encouraged me to pursue theoretical physics.