Richard Feynman fiddled with electronics in a home laboratory, growing up. I fiddled with arts and crafts.1 I glued popsicle sticks, painted plaques, braided yarn, and designed greeting cards. Of the supplies in my family’s crafts box, I adored the beads most. Of the beads, I favored the glass ones.

I would pour them on the carpet, some weekend afternoons. I’d inherited a hodgepodge: The beads’ sizes, colors, shapes, trimmings, and craftsmanship varied. No property divided the beads into families whose members looked like they belonged together. But divide the beads I tried. I might classify them by color, then subdivide classes by shape. The color and shape groupings precluded me from grouping by size. But, by loosening my original classification and combining members from two classes, I might incorporate trimmings into the categorization. I’d push my classification scheme as far as I could. Then, I’d rake the beads together and reorganize them according to different principles.

Why have I pursued theoretical physics? many people ask. I have many answers. They include “Because I adored organizing craft supplies at age eight.” I craft and organize ideas. 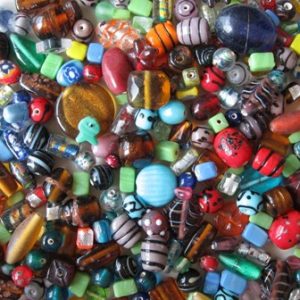 I’ve blogged about the out-of-time-ordered correlator (OTOC), a signature of how quantum information spreads throughout a many-particle system. Experimentalists want to measure the OTOC, to learn how information spreads. But measuring the OTOC requires tight control over many quantum particles.

I proposed a scheme for measuring the OTOC, with help from Chapman University physicist Justin Dressel. The scheme involves weak measurements. Weak measurements barely disturb the systems measured. (Most measurements of quantum systems disturb the measured systems. So intuited Werner Heisenberg when formulating his uncertainty principle.)

I had little hope for the weak-measurement scheme’s practicality. Consider the stereotypical experimentalist’s response to a stereotypical experimental proposal by a theorist: Oh, sure, we can implement that—in thirty years. Maybe. If the pace of technological development doubles. I expected to file the weak-measurement proposal in the “unfeasible” category.

But experimentalists started collaring me. The scheme sounds reasonable, they said. How many trials would one have to perform? Did the proposal require ancillas, helper systems used to control the measured system? Must each ancilla influence the whole measured system, or could an ancilla interact with just one particle? How did this proposal compare with alternatives?

I met with a cavity-QED2 experimentalist and a cold-atoms expert. I talked with postdocs over skype, with heads of labs at Caltech, with grad students in Taiwan, and with John Preskill in his office. I questioned an NMR3 experimentalist over lunch and fielded superconducting-qubit4 questions in the sunshine. I read papers, reread papers, and powwowed with Justin.

I wouldn’t have managed half so well without Justin and without Brian Swingle. Brian and coauthors proposed the first OTOC-measurement scheme. He reached out after finding my first OTOC paper.

Amidst that analysis, in a 10 x 6 table, we classify glass beads. 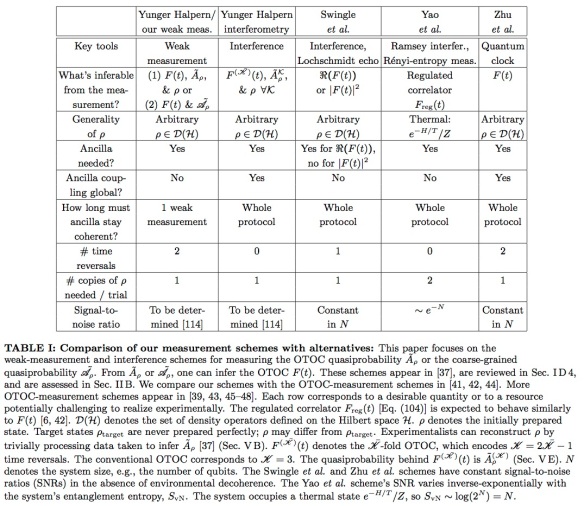 We inventoried our experimental conversations and distilled them. We culled measurement-scheme features analogous to bead size, color, and shape. Each property labels a row in the table. Each measurement scheme labels a column. Each scheme has, I learned, gold flecks and dents, hues and mottling, an angle at which it catches the light.

I’ve kept most of the glass beads that fascinated me at age eight. Some of the beads have dispersed to necklaces, picture frames, and eyeglass leashes. I moved the remnants, a few years ago, to a compartmentalized box. Doesn’t it resemble the table?

That’s why I work at the IQIM.

1I fiddled in a home laboratory, too, in a garage. But I lived across the street from that garage. I lived two rooms from an arts-and-crafts box.

2Cavity QED consists of light interacting with atoms in a box.

With thanks to all who questioned me; to all who answered questions of mine; to my wonderful coauthors; and to my parents, who stocked the crafts box.