I have a soft spot for lamassu. Ten-foot-tall statues of these winged bull-men guarded the entrances to ancient Assyrian palaces. Show me lamassu, or apkallu—human-shaped winged deities—or other reliefs from the Neo-Assyrian capital of Nineveh, and you’ll have trouble showing me the door.

Assyrian art fills a gallery in London’s British Museum. Lamassu flank the gallery’s entrance. Carvings fill the interior: depictions of soldiers attacking, captives trudging, and kings hunting lions. The artwork’s vastness, its endurance, and the contact with a three-thousand-year-old civilization floor me. I tore myself away as the museum closed one Sunday night.

I visited the British Museum the night before visiting Jonathan Oppenheim’s research group at University College London (UCL). Jonathan combines quantum information theory with thermodynamics. He and others co-invented thermodynamic resource theories (TRTs), which Quantum Frontiers regulars will know of. TRTs are quantum-information-theoretic models for systems that exchange energy with their environments.

Energy is conjugate to time: Hamiltonians, mathematical objects that represent energy, represent also translations through time. We measure time with clocks. Little wonder that one can study quantum clocks using a model for energy exchanges.

Mischa Woods, Ralph Silva, and Jonathan used a resource theory to design an autonomous quantum clock. “Autonomous” means that the clock contains all the parts it needs to operate, needs no periodic winding-up, etc. When might we want an autonomous clock? When building quantum devices that operate independently of classical engineers. Or when performing a quantum computation: Computers must perform logical gates at specific times. 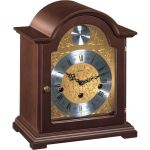 Wolfgang Pauli and others studied quantum clocks, the authors recall. How, Pauli asked, would an ideal clock look? Its Hamiltonian,

The Hamiltonian would be conjugate to a “time operator”

denote an eigenstate of

. This “time state” would equal an even superposition over the

’s. The clock would occupy the state

Imagine measuring the clock, to learn the time, or controlling another system with the clock. The interaction would disturb the clock, changing the clock’s state. The disturbance wouldn’t mar the clock’s timekeeping, if the clock were ideal. What would enable an ideal clock to withstand the disturbances? The ability to have any amount of energy:

Approximations to them can. Mischa, Ralph, and Jonathan designed a finite-size clock, then characterized how accurately the clock mimics the ideal. (Experts: The clock corresponds to a Hilbert space of finite dimensionality

. The clock begins in a Gaussian state that peaks at one time state

. The finite-width Gaussian offers more stability than a clock state.)

Disturbances degrade our ability to distinguish instants by measuring the clock. Imagine gazing at a kitchen clock through blurry lenses: You couldn’t distinguish 6:00 from 5:59 or 6:01. Disturbances also hinder the clock’s ability to implement processes, such as gates in a computation, at desired instants.

Mischa & co. quantified these degradations. The errors made by the clock, they found, decay inverse-exponentially with the clock’s size: Grow the clock a little, and the errors shrink a lot.

Time has degraded the lamassu, but only a little. You can distinguish feathers in their wings and strands in their beards. People portray such artifacts as having “withstood the flow of time,” or “evaded,” or “resisted.” Such portrayals have never appealed to me. I prefer to think of the lamassu as surviving not because they clash with time, but because they harmonize with it. The prospect of harmonizing with time—whatever that means—has enticed me throughout my life. The prospect partially underlies my research into time—perhaps childishly, foolishly—I recognize if I remove my blurry lenses before gazing in the mirror.

The creation of lasting works, like lamassu, has enticed me throughout my life. I’ve scrapbooked, archived, and recorded, and tended memories as though they were Great-Grandma’s cookbook. Ancient civilizations began alluring me at age six, partially due to artifacts’ longevity. No wonder I study the second law of thermodynamics.

Yet doing theoretical physics makes no sense from another perspective. The ancient Egyptians sculpted granite, when they could afford it. Gudea, king of the ancient city-state of Lagash, immortalized himself in diorite. I fashion ideas, which lack substance. Imagine playing, rather than rock-paper-scissors, granite-diorite-idea. The idea wouldn’t stand a chance.

Would it? Because an idea lacks substance, it can manifest in many forms. Plato’s cave allegory has manifested as a story, as classroom lectures, on handwritten pages, on word processors and websites, in cartloads of novels, in the film The Matrix, in one of the four most memorable advertisements I received from colleges as a high-school junior, and elsewhere. Plato’s allegory has survived since about the fourth century BCE. King Ashurbanipal’s lion-hunt reliefs have survived for only about 200 years longer.

The lion-hunt reliefs—and lamassu—exude a grandness, a majesty that’s attracted me as their longevity has. The nature of time and the perfect clock have as much grandness. Leaving the British Museum’s Assyrian gallery at 6 PM one Sunday, I couldn’t have asked for a more fitting location, 24 hours later, than in a theoretical-physics conversation.

With thanks to Jonathan, to Álvaro Martín-Alhambra, and to Mischa for their hospitality at UCL; to Ada Cohen for the “Art history of ancient Egypt and the ancient Near East” course for which I’d been hankering for years; to my brother, for transmitting the ancient-civilizations bug; and to my parents, who fed the infection with museum visits.

Click here for a follow-up to the quantum-clock paper.