I’d completed about half my candidacy exam.

Four Caltech faculty members sat in front of me, in a bare seminar room. I stood beside a projector screen, explaining research I’d undertaken. The candidacy exam functions as a milepost in year three of our PhD program. The committee confirms that the student has accomplished research and should continue.

I was explaining a quantum-thermodynamics problem. I reviewed the problem’s classical doppelgänger and a strategy for solving the doppelgänger. Could you apply the classical strategy in the quantum problem? Up to a point. Beyond it, you’d need

“Does anyone here like the Beatles?” I asked the committee. Three professors had never participated in an exam committee before. The question from the examinee appeared to startle them.

One committee member had participated in cartloads of committees. He recovered first, raising a hand.

In the middle of my candidacy exam.

The moment remains one of the highlights of my career.

Throughout my PhD career, I’ve reported to John. I’ve emailed an update every week and requested a meeting about once a month. I sketch the work that’s firing me, relate my plans, and request feedback.

Much of the feedback, I’ve discerned over the years, condenses into aphorisms buried in our conversations. I doubt whether John has noticed his aphorisms. But they’ve etched themselves in me, and I hope they remain there.

“Think big.” What would impact science? Don’t buff a teapot if you could be silversmithing.

Education serves as “money in the bank.” Invest in yourself, and draw on the interest throughout your career.

“Keep it simple,” but “do something technical.” A teapot cluttered with filigree, spouts, and eighteen layers of gold leaf doesn’t merit a spot at the table. A Paul Revere does.

“Do what’s best for Nicole.” I don’t know how many requests to speak, to participate on committees, to explain portions of his lecture notes, to meet, to contribute to reports, and more John receives per week. The requests I receive must look, in comparison, like a mouse to a mammoth. But John exhorts me to to guard my time for research—perhaps, partially, because he gives so much time, including to students.

“Move on.” If you discover an opportunity, study background information for a few months, seize the opportunity, wrap up the project, and seek the next window.

John has never requested my updates, but he’s grown used to them. I’ve grown used to how meetings end. Having brought him questions, I invite him to ask questions of me.

“Are you having fun?” he says.

I tell the Beatles story when presenting that quantum-thermodynamics problem in seminars.

“I have to digress,” I say when the “Help!” image appears. “I presented this slide at a talk at Caltech, where John Preskill was in the audience. Some of you know John.” People nod. “He’s a…mature gentleman.”

I borrowed the term from the apparel industry. “Mature gentleman” means “at a distinguished stage by which one deserves to have celebrated a birthday of his with a symposium.”

Some audience members grin. Some titter. Some tilt their heads from side to side, as though thinking, “Eh…”

John has impact. He’s logged boatloads of technical achievements. He has the scientific muscle of a scientific rhinoceros.

And John has fun. He doesn’t mind my posting an article about audience members giggling about him.

Friends ask me whether professors continue doing science after meriting birthday symposia, winning Nobel Prizes, and joining the National Academy of Sciences. I point to the number of papers with which John has, with coauthors, electrified physics over the past 20 years. Has coauthored because science is fun. It merits singing about during candidacy exams. Satisfying as passing the exam felt two years ago, I feel more honored when John teases me about my enthusiasm for science. 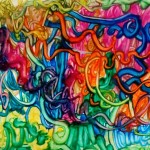 A year ago, I ate lunch with an alumnus who’d just graduated from our group. Students, he reported, have a tradition of gifting John a piece of art upon graduating. I relayed the report to another recent alumnus.

“Really?” the second alumnus said. “Maybe someone gave John a piece of art and then John invented the tradition.”

Regardless of its origin, the tradition appealed to me. John has encouraged me to blog as he’s encouraged me to do theoretical physics. Writing functions as art. And writing resembles theoretical physics: Each requires little more than a pencil, paper, and thought. Each requires creativity, aesthetics, diligence, and style. Each consists of ideas, of abstractions; each lacks substance but can outlive its creator. Let this article serve as a finger painting for John Preskill.

Thanks for five fun years. 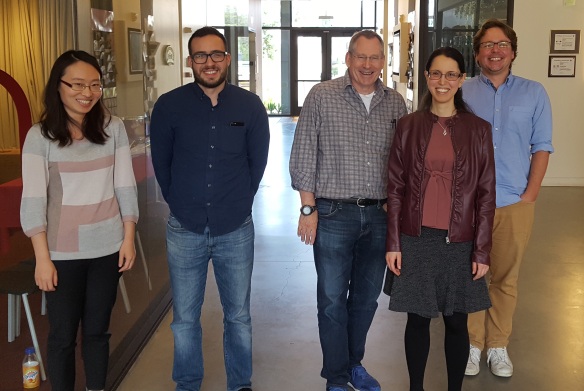 7 thoughts on “A finger painting for John Preskill”