Haunted mansions have ghosts, football teams have mascots, and labs have in-house theorists. I found myself posing as a lab’s theorist at Caltech. The gig began when Oskar Painter, a Caltech experimentalist, emailed that he’d read my first paper about quantum chaos. Would I discuss the paper with the group?

Oskar’s lab was building superconducting qubits, tiny circuits in which charge can flow forever. The lab aimed to control scores of qubits, to develop a quantum many-body system. Entanglement—strong correlations that quantum systems can sustain and everyday systems can’t—would spread throughout the qubits. The system could realize phases of matter—like many-particle quantum chaos—off-limits to most materials.

How could Oskar’s lab characterize the entanglement, the entanglement’s spread, and the phases? Expert readers will suggest measuring an entropy, a gauge of how much information this part of the system holds about that part. But experimentalists have had trouble measuring entropies. Besides, one measurement can’t capture many-body entanglement; such entanglement involves too many intricacies. Oskar was searching for arrows to add to his lab’s measurement quiver.

I’d proposed a protocol for measuring a characterization of many-body entanglement, quantum chaos, and thermalization—a property called “the out-of-time-ordered correlator.” The protocol appealed to Oskar. But practicalities limit quantum many-body experiments: The more qubits your system contains, the more the system can contact its environment, like stray particles. The stronger the interactions, the more the environment entangles with the qubits, and the less the qubits entangle with each other. Quantum information leaks from the qubits into their surroundings; what happens in Vegas doesn’t stay in Vegas. Would imperfections mar my protocol?

I didn’t know. But I knew someone who could help us find out.

Justin Dressel works at Chapman University as a physics professor. He’s received the highest praise that I’ve heard any experimentalist give a theorist: “He’s a theorist I can actually talk to.” With other collaborators, Justin and I simplified my scheme for measuring out-of-time-ordered correlators. Justin knew what superconducting-qubit experimentalists could achieve, and he’d been helping them reach for more.

How about, I asked Justin, we simulate our protocol on a computer? We’d code up virtual superconducting qubits, program in interactions with the environment, run our measurement scheme, and assess the results’ noisiness. Justin had the tools to simulate the qubits, but he lacked the time.

Know any postdocs or students who’d take an interest? I asked.

José Raúl González Alonso has a smile like a welcome sign and a coffee cup glued to one hand. He was moving to Chapman University to work as a Grand Challenges Postdoctoral Fellow. José had built simulations, and he jumped at the chance to study quantum chaos. 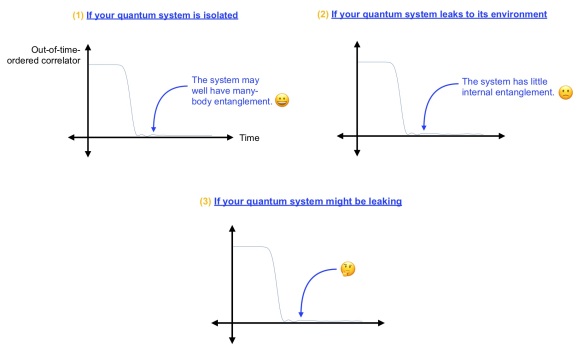 Our triumvirate identified a solution. Justin and I had discovered another characterization of quantum chaos and many-body entanglement: a quasiprobability, a quantum generalization of a probability.

Physical Review Letters published our paper last month. Working with Justin and José deepened my appetite for translating between the abstract and the concrete, for proving abstractions as a theorist’s theorist and realizing them experimentally as a lab’s theorist. Maybe, someday, I’ll earn the tag “a theorist I can actually talk with” from an experimentalist. For now, at least I serve better than a football-team mascot.

5 thoughts on ““A theorist I can actually talk with””